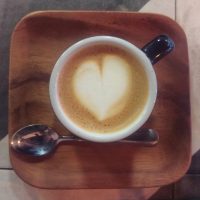 Frequency is a new addition to the coffee scene around King’s Cross Station. Owned by a lovely couple, Justo and Joey, it’s slightly off the beaten track, it’s down King’s Cross Road in the direction of Exmouth Market, tucked away in a little parade of shops. It’s been open all of two months, serving coffee from Workshop and tea from Joe’s Tea, both local suppliers. This is backed up by an interesting breakfast selection, sandwiches and, of course, plenty of cake.

When it comes to coffee, there’s a commendably concise espresso-based menu, plus a choice of three single-origins on filter (one of which is the same bean in the hopper for the espresso). You can have your filter coffee as either a pour-over through the V60 or an Aeropress, with the beans changing on a seasonal basis. The beans, by the way, are also for sale.

Frequency itself is a cosy space, long and thin, with seating at the front and in a little room at the back if you want to escape the coming and going of the other customers. There’s also a small table outside the front of Frequency, where it sits in a beautifully-tiled entrance.

That I knew about Frequency at all is down to fellow coffee-blogger, Bex of Double Skinny Macchiato, who wrote about it back in July shortly after it opened. However, I’d rather forgotten about it until I rolled up to stay at the well-known hotel chain across the road, whereupon I spied it from the door. Well, that was tomorrow morning’s coffee and breakfast sorted then.

Frequency has a simple shop front, with a pair of floor-to-ceiling windows flanking a slightly-recessed glass door. Inside, the layout is equally simply layout as Frequency recedes into the distance. The seating is at the front, while the counter, on the right, is at the back. To the right of the door, there’s a two-person window-bar, which extends to a four-person bar against right-hand wall. On the left, a wooden bench runs along the left-hand wall, lined with four square, two-person tables.

Beyond this comes counter, taking up the rest of the right-hand side. Opposite it is door which leads downstairs to a kitchen/storeroom. Bex’s tell me that there’s also a basement room, which isn’t open yet. In the long run, I believe that the plan is to host various musical events in the basement as well as to open it up as additional seating. Music, by the way, is an under-stated theme of Frequency (which goes with the name), including a music stand by the door, which holds the menu.

Back upstairs, there’s another small two/three-person bar after the door, opposite the end of the counter. However, there’s more. Through an opening in the back wall, you reach a small room at the back, with an L-shaped bench against the back and right-hand walls, where there are three more tables.

The décor is sparse, but effective. The wooden floorboards go well with the off-white walls and black ceiling. There’s plenty of natural light from the windows at the front, while the room at the back has its own window on the left. In between, multiple lights, hung from wires strung from a central point, provide additional illumination.

I’d arrived for breakfast and as soon as I saw the toast menu, with a choice of pugliese loaf or spelt sultana loaf, my mind was made up. For those not so easily swayed by toast, there is also a choice of pastries and scones, plus porridge and granola. For those with a sweet tooth, there are plenty of cakes, plus a selection of sandwiches for lunch.

I decided on the spelt sultana loaf for my breakfast, which was excellent. I was served with a crunchy, thick slice of bread, the sultanas adding a certain something to the equation. I paired this with my usual flat white, a Hunkute espresso from Workshop. This is a single-origin coffee from the Sidamo region of Ethiopia and was lovely and fruity, something I don’t always get through the milk in a flat white.

My coffee was beautifully-presented, arriving on a small wooden tray rather than a saucer. In a nice touch, you pay when you leave, rather than when you order.