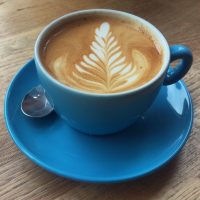 I’ve been consistently surprised at the size of Cambridge’s speciality coffee shops, such as Thursday’s Coffee Spot, The Espresso Library. To put it bluntly, they’re huge. Urban Larder, in contrast, redresses the balance, size-wise: a lovely, compact, cosy, friendly little shop. It’s a little way out of the centre, in a small parade of shops on The Broadway.

The coffee’s from Bury St Edmund’s Butterworth & Son, with its award-winning four-bean seasonal blend on espresso, plus decaf on a second grinder. Since my visit (starting from today in fact), the Urban Larder is also serving a single-origin as a pour-over using the V60. There’s also a range of Butterworth & Son loose-leaf teas.

However, that’s not all there is to the Urban Larder. Its other speciality is the cheese toastie, with a variety of interesting fillings to choose from. If only I was still doing the Coffee Spot’s Best Cheese Toastie Award… The larder part of the name is well served by rows of groceries on the shelves by the counter and against the left-hand wall, where you can pick up eggs, flour and an array of sauces and chutneys, reminding me of a smaller version of No 12 Easton.

The Urban Larder sits in a small parade of shops on the north side of The Broadway. Three two-person tables sit outside on the wide pavement and, while it’s a busy road, as outside locations go, it’s not too bad. These are in front of the large sash window which occupies much of the right-hand side of the Urban Larder and which can be opened in good weather (such as the day that I was there).

The door is recessed on the left, while in the window to the right, is a four-person window bar which, when the windows are open, is in many ways better than sitting outside, although you do have your back to the rest of the café. There’s a second bar just inside the door against the left-hand wall, taking up the space between door and counter, which occupies the entire width of the back wall. The window-bar is quite low, with chairs, whereas the second bar is quite high, with stools.

The remaining seating consists of four tables. In the centre of the room, there’s a four-person and a two-person table, while on the right-hand side there are two two-person tables. There would be room for one more except that the space where it would go is occupied by an ice cream serving station.

There are also well-stocked retail shelves on the left-hand wall above the bar, filled with bags of Butterworth coffee, both the house-blend and various single-origins. There are also bags of floor, eggs, and various sauces, condiments, etc, for sale. These can be found on further sets of shelves to the left of the counter, putting the “larder” into Urban Larder.

I started my visit with a very fine flat white, using Butterworth & Son’s standard four-bean blend, which always goes well in milk. The coffee’s flavour comes strongly through the milk without being in conflict with it. The milk itself was rich and creamy, topped off with some impressive latte art by my barista, Helen.

The Urban Larder specialises in the cheese toastie, with five different options chalked up on the menu board. I opted for the tomato-onion relish toastie, which consisted of three different cheeses, balsamic-roasted tomatoes and caramelised onions. Plate-lovers will be disappointed that it was served on a (very fine) wooden slab, although I really liked the presentation. The toastie itself was excellent, consisting of two very generous slices of sour-dough bread, toasted to perfection, and oozing with cheese and cherry tomatoes. The relish, with the onions giving it some extra bite, lifted it far above the ordinary.

Afterwards I got chatting to Duncan, the owner, who opened Urban Larder at the start of 2015. He sees it very much as an evolving project, taking the approach of doing a few things well before adding extra features. As an example, the Urban Larder only served espresso-based drinks when it opened, but Duncan always wanted to add pour-over when the time was right. Rather than rushing things, he did his research and ensured that all his staff were properly trained before launching the pour-over service this morning. Initially the Urban Larder will be serving the Butterworth & Son single-origin of the month through the V60, which this month is the Ethiopia Sidamo Shakiso. Pop in and grab a cup.