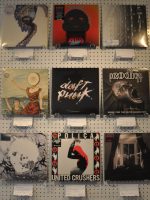 There aren’t that many places which combine speciality coffee and music, something that has always surprised me. Swindon’s Baila Coffee & Vinyl springs to mind, as does Oxford’s The Keen Bean Coffee Club (which I believe has changed hands since I last visited) while Porto’s Bop is a recent arrival. In fairness, today’s Coffee Spot, Watford’s The LP Café, has been on my radar for a while: I’ve just never had reason to go to Watford before now…

I’m very glad that I eventually made the trip though. The LP Café, as the name suggests, combines serving speciality coffee with selling vinyl LPs. It’s an interesting combination: one very much a recent thing (speciality coffee), the other very old school, but rapidly coming back into fashion (LPs).

The coffee (espresso only) is from London stalwarts, Climpson and Sons, a roaster, in speciality terms, almost as old as vinyl itself. Its Estate Blend is supplemented by a guest espresso (also from Climpson and Sons) on the second grinder. Breakfast and lunch options are joined by a tempting array of cakes. As well as the LPs (which you can buy on-line and collect in person), there are also bags of coffee for sale.

The LP Café doesn’t have the most promising location, being slightly out of the centre, just around the corner from Watford Junction station. It’s in a small parade of shops by a dual carriageway, next to a busy roundabout. Very much a neighbourhood place, everyone in the café (other than me!) knew everyone else. It’s the sort of place where the baristas come to drink coffee on their days and where the owner sits in the corner with her MacBook.

The owner in question was Leila, who, with her boyfriend Paul, became inspired by a record shop/bar in Naples, deciding to open their own in their home town of Watford. Somewhere along the line the bar was changed to a coffee shop and, three years ago, The LP Café opened its doors for the first time. The name, by the way, both describes what the café does, as well as standing for “Leila and Paul”. It is perhaps for the best that they weren’t called Claire and David!

The LP Café has a simple layout, with not quite parallel walls, so it gets slightly narrower as it goes back. It’s about three times as deep as it is wide, with a glass front, the door on the right. There’s a table outside on the left, with another cluster of tables on the opposite side of the pavement.

Stepping inside, The LP Café’s dual nature is immediately apparent. The counter, cake to the fore, is directly ahead of you on the right-hand side. Between it and the door, there’s a rack of LPs on the wall, although that notwithstanding, the front of The LP Café is devoted to the café side of the business. A backless bench runs the width of the window, with three two-person tables in a row in front of it. There are three further two-person tables against the left-hand wall, a pair followed immediately by a solitary one. After this The LP Café turns from café to record store, with boxes of LPs lining the left-hand wall and half of the back wall.

I did ask whether The LP Café saw itself as a record store selling coffee or a coffee shop selling LPs and was told it’s about 50/50, with both sides of the business supporting each other. Face-to-face, a lot more coffee is sold, but plenty of LPs are sold online, both new and second-hand. There’s also a rack of clothes for sale to the right of the door, plus some shelves with a few bags of retail coffee beyond that. They also double as bookshelves, but I don’t think that the books were for sale.

The coffee is from Climpson and Sons and I started off with a flat white made using the Estate Blend, which went well with the milk. A rich, bold coffee, it came strongly through the milk, without ever being in conflict with it. I followed this with the guest espresso, which was, during my visit, Climpson & Sons’ autumn espresso, an El Salvador single-origin. Quite fruity and acidic, it felt to me that it had run a little long for my tastes. I also had a slice of the lemon drizzle cake, which was excellent. Sweet and moist, it had a strong kick of lemon, which I always appreciate!

December 2016: The LP Café was a runner-up for the 2016 Most Unlikely Place to Find a Coffee Spot Award.