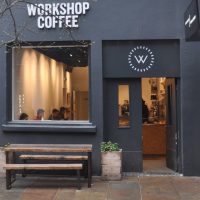 Workshop Coffee is one of London’s better-known (and original) roaster/café chains. Starting from its flagship branch in Clerkenwell, where, until recently, all the roasting was done, it’s slowly expanded, now with a total of four London coffee shops. I first really came across it (other than as a roaster) when it opened its Fitzrovia coffee bar in 2014, but I’ve taken my sweet time in popping into the other branches, finally making to the Marylebone branch last week. At some point I’ll have to drag myself over to Holborn and Clerkenwell, which has seen a few changes since the roaster moved out.

The Marylebone branch is on St Christopher’s Place, just a stone’s throw from the busy Oxford Street. Tucked away in the eastern arm (St Christopher’s Place is cross-shaped), it’s an oasis of calm, which is also open until seven in the evening. Simple in layout, there’s a bench along the wall providing most of the seating. The coffee offering is excellent, with two single-origins and decaf on espresso, plus two or three single-origins available through the Aeropress, with one of them on bulk-brew. If you’re hungry, there’s a wide selection of cake and a limited range of sandwiches.

In true Coffee Spot fashion, I’m visiting branches of Workshop Coffee in the wrong order, starting with the most recent, in Fitzrovia, before moving onto this, the second branch. However, you could argue that this is the most recent branch, since it used to be on Wigmore Street, only moving to St Christopher’s Place two years ago. I’m not convinced…

A small spot (as befits West End rents, no doubt!), it has a simple layout. Long and thin, there’s a large window at the front on the left, with the door to the right. That’s it for windows and, while south-facing, it’s tucked away in a corner, so there’s very little natural light. Instead, there are lots of light fittings which, naturally, I had great fun in photographing. The décor is just as simple: white walls, a concrete floor, and a black ceiling with exposed air-conditioning ducts and other cabling. If I’ve not made it sound very appealing, I apologise since I found it welcoming, quiet and relaxed.

Had it not been raining, I’d have been tempted to sit outside on the single, narrow table in front of the window, the pedestrianised St Christopher’s Place looking like the ideal outdoor spot. Instead, I went inside, where a padded orange bench, starting to the left of the door, runs around under the window and along about two-thirds of the left-hand wall. There are small coffee tables placed at regular intervals along the bench, but, alas, all the seats were taken. Instead I went right to the back where a deep, recessed bar made of chipboard takes up almost all of the back wall. Here I found a perch on one of the bar stools. You can fit maybe 10 people along the bench, four or five at the back if you squeeze up.

The counter occupies the remaining space, running along the right-hand side. An array of cakes opposite the door tempts you on entering, then, opposite the bench on the left-hand wall, come the three Mythos 1 grinders (two single-origin, one decaf), a three-group Synesso and finally, the till, plus a boiler for the pour-over. The batch-brewer and an EK43 for the filter coffee are on the wall behind the counter. If you want to buy any of the coffee or coffee-related kit, there are retail shelves on the right-hand wall between the door and counter (front), and between counter and bar (back).

Marylebone has the same coffee offering as the other Workshops, with the options changing every month or so. Had I not been totally over-caffeinated after visiting the Made by Hand Pop-up and trying ALL THE COFFEE, I’d have been tempted by either the Gitesi on espresso or the Morundo on Aeropress (both Rwandans). Instead I had the sugar cane process decaf Colombian as a cappuccino, which was awesome. If anyone still believes that decaf can’t be tasty, get down to Workshop this instant! This was rich, fruity and very sweet, combining perfectly with the milk. I also had a sip of another Colombian, the Fernando Trujillo on batch-brew, which was also very good.

Finally, I grabbed some lunch, a very crunchy cheese and pickle toasty. Although I would have preferred wholemeal bread, it was otherwise excellent, oozing with sweet pickle, which is just how I like it.