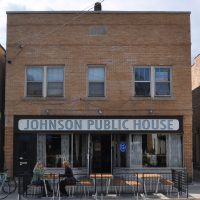 Having recently celebrated its sixth birthday, Johnson Public House is something of a stalwart of Madison’s small, but growing, speciality coffee scene. Located just north-east of the Square, the spiritual and literal centre of Madison, it’s definitely worth the short stroll along the isthmus required to reach it.

Set on the ground floor of a three-storey, brick-built building dating from 1923, Johnson Public House (which, despite sounding like a pub to British ears, is definitely a coffee house) is a large, open space, with plenty of seating and a generous counter at the back. You can also sit outside by the (relatively) busy road at one of three large picnic tables.

Johnson Public House is a family-run business which started life a multi-roaster, with the likes of Intelligentsia as a mainstay. However, about a year ago, Johnson Public House set up a roasting arm, Kin-Kin, which now supplies the bulk of the coffee, although you will also find one or two guests in there as well. There are two options on espresso and four single-origins on pour-over, using V60, Chemex and cafetiere. If you are hungry, there’s a select breakfast and lunch menu, featuring sandwiches and the like, plus cake.

Johnson Public House is a 15-minute walk north-east of the centre, on the north side of the busy East Johnson Street. There’s a fenced-off seating area, with three large, picnic-style tables, directly in front of the coffee shop. Generous windows run full width across the front, with a recessed glass door slightly offset to the left. Smaller windows flank the door, each sloping back at 45⁰, effectively funnelling you inside and creating space for two window-bays.

The interior is large and open, a central ceiling beam running front-to-back, effectively splitting it in two. The ceiling itself is a glorious, tinned affair, except above the counter, where it’s lower and covered with polystyrene tiles. Talking of which, the counter is at the back on the left, running parallel to the wall. It’s curved at the front, where there are four bar stools, while the rest faces the right-hand wall. The till comes first, then the pour-over area, and finally a two-group La Marzocco Strada espresso machine with twin grinders. Beyond that is a kitchen/storage area.

It could be dark back here, save for two large windows in the right-hand wall. These consist of multiple, square frosted panes, providing plenty of diffuse natural light, supplemented by multiple spotlights and more conventional light-fittings over the counter. The walls are painted a neutral grey which goes well with the tin ceiling. The front half, where there’s more natural light, doubles as an art gallery, both walls adorned with various works from local artist Natalie Wright, who uses the space to display her work. Although not for sale, you can by prints of her pieces.

Johnson Public House has a concise espresso menu, which, I was pleased to see, contains cortado and flat white as options. There’s a choice of two beans on espresso, while there are four pour-over options, with sizes varying from 8, 12 and 16oz via the V60, 24oz (Chemex) and 32oz (cafetiere). Normally a minimum of three of the beans are from Kin-Kin, the rest coming from a rapidly-changing cast of guest roasters. However, during my visit, all the coffee was from Kin-Kin, which is somewhat rare.

I started with the Plandas Colombian as an espresso, and followed that up with an 8oz V60 of the Sidama, a naturally processed Ethiopian, both recommendations of my barista, Lennon, who has been with Johnson Public House since it opened. My espresso was a well-pulled shot, with plenty of body, served with a glass of sparkling water, while the pour-over was a lovely, sweet, well-balance coffee. Finally, I had a slice of an awesome apple cake, a really rich cake, with lovely chunks of apple.

You can also see what I made of Kin-Kin’s coffee stand at Festival Foods when I visited the following week.