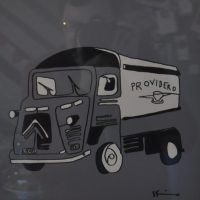 Providero started life as an old Citroën van, working the Colwyn Bay Sea Front. This, in Llandudno Junction, is Providero’s first bricks-and-mortar store, opening in February 2014, to be joined by a second, bigger store in Llandudno, opening in January 2017. Although I’m a regular visitor to my Dad’s in North Wales, he lives close to the border and I rarely have the time/opportunity to venture further west along the coast. However, after a brief visit to Providero in October, I found myself with both time and a car when I was back over Christmas, so made a beeline for Providero.

The Llandudno Junction branch occupies a compact, two-storey building on the top of a hill, just east of the railway station, so it’s fairly easy to access by public transport. Serving coffee from local roasters Heartland Coffee in nearby Llandudno, there’s a house-blend on espresso, which is joined by a single-origin guest, which changes every month, and decaf, again from Heartland. There’s also a daily batch-brew and, if you don’t want coffee, an impressive range of loose-leaf teas. Finally, if you’re hungry, there’s a range of cake from Bristol’s Cakesmiths, plus toast, where you have a choice of breads.

On a corner on the top of Conwy Road, the main road running through Llandudno Junction, there’s a neat, two-storey building, home to the first bricks-and-mortar Providero. Like North Berwick’s Steampunk, Bristol’s Tincan Coffee Co and Exeter’s Camper Coffee Co, Providero’s made the move from serving coffee from an old van (in this case a Citroën) to opening a proper speciality coffee shop.

While there’s a slightly sloping bench outside, you’re best off heading inside through the door on the corner. Downstairs, the layout’s simple, just a rectangle, the long side running along the main road, punctuated by a single, large square window. There’s a four-person window-bar here, while the only other seating is along the shorter, left-hand wall, where you’ll find a two-person table with a small window beyond/above it.

Downstairs is dominated by an open staircase running left-to-right along the back wall and the large, wooden counter, tucked under the stairs. This goes well with the wooden floorboards and exposed brick/whitewashed walls. The only other thing of note downstairs, with the exception of the lovely staff, are the retail shelves on the right-hand wall which stock a decent range of beans from Heartland Coffee and some coffee kit.

The bulk of the seating is upstairs, another simple rectangle, although this time with an extension towards the back. There are three four-person tables along the front, where there’s another large window, and a single, four-person table overlooking the stairs. At the far left-hand end you’ll find, tucked away at the back, beyond/behind the stairs, a cosy corner with a couple of armchairs and a sofa, the ideal spot to sequester yourself away.

Providero uses a seasonal blend from Heartland as its main espresso, which is recommended for milk-based drinks. There’s also a single-origin guest which changes every month, although while I was there, it was also from Heartland. Finally, there’s a batch-brew filter, which changes every day, drawn from the range of beans on sale. The particular bean depends on what the staff feel like in the morning, and, when I was there, it happened to be the guest espresso, an Ethiopian Guji.

I asked the barista for a recommendation and she suggested the Guji. The guest is chosen to go well as an espresso, but she said it also went well in smaller milk drinks (flat white and smaller). I tried it as an espresso, which arrived with a glass of water. Sometimes Ethiopians can be a bit too bright for me, but this was quite different. Darker, with plenty of body and a very syrupy mouthfeel, it was smooth rather than challenging and a real delight to drink. The staff very kindly made me a flat white as well that I could try the Guji in milk. Here, the sweetness of the milk really offsets the slightly dark nature of the coffee, the result being very rich and creamy.

I also had some toast, selecting the sourdough from the choices on offer. The basic order is one slice, although you can add as many as you like, so I had two for good measure. This came with a selection of homemade jams. I went for mulled plum, which was very fine, as was the toast, which was crunchy on the outside and soft on the inside. Heavenly.

Note that Providero operates summer/winter opening times. In the summer, it’s open until 18:00 in the week and until 17:00 on Saturday.