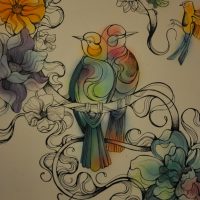 Half way down Judd Street, just south of King’s Cross and St Pancras stations, Half Cup has been on my radar for a long time now, probably for almost as long as it’s been open, which is three years. I visited on several occasions, but sadly, until now, I’ve never been in a position to write it up, either being in a hurry to move on (like when I had breakfast there before this year’s London Coffee Festival) or else I’ve been meeting someone (the preliminary meetings about The Philosophy of Coffee where held here) and hence not been able to take detailed notes.

Half Cup serves Nude Espresso as its house-blend on espresso which has recently been joined by a guest espresso. This was, during my visit, the Penny Rock seasonal espresso blend from Red Bank Coffee in Cumbria. If you’re dairy-free, there’s an excellent selection of non-dairy milk alternatives, including almond, coconut, soya, oat and hazelnut. If you don’t fancy coffee, then there’s organic loose-leaf tea and a range of alcohol from craft beer to wine. There’s also an excellent brunch menu, which is served until 15.45, plus sandwiches to go and an awesome selection of cake.

Half Cup occupies two near-identical shop-fronts on London’s Judd Street, each with a door on the left and single, large window on the right. The left-hand side holds the seating, although there are multiple tables outside on the pavement, while the right-hand side has the counter and kitchen, the two sides joined by a doorway in the party wall.

Although there’s a door on the left, it’s not used, so you enter on the right, where you end up next to the counter, which runs the full length of the right-hand wall. You order here unless it’s a weekend, in which case, the staff show you to a table and take your order there. There’s not a lot else here, other than the to-go/retail section at the back, beyond which, just visible through a hatch in the wall, is the kitchen.

There’s a large seating area on the left, which stretches a long way back (the kitchen takes up half the space on the right, the equivalent area on the left given over to seating). Starting at the front, there’s a three-person window bar next to the recessed (and unused) door. A wooden bench runs along the left-hand wall with two two-person tables, and a single four-person one. On the right, a three-person table occupies the space between window and doorway, then comes a short wooden bench with two three-person tables.

It feels as if this was a house with front and back rooms which have been knocked into one. Two pillars remain on the left/right, demarcating front/back. Beyond the pillars, a low communal table with benches occupies the centre of the room, with a two-person bar in an awkward niche on left, while in a similarly-awkward, but differently-shaped niche on the right, is a four-person table. Finally, another wooden bench runs along the back wall, under a solitary window, with three two-person tables, while a high two-person bar rounds things off on the right-hand wall.

Although Half Cup has packed a lot in, it doesn’t feel too crowded, helped by wonderfully high ceilings and plenty of natural light, supplemented by some excellent lighting. There’s a lovely tiled floor, but best of all are the amazing paintings of plants and birds on the walls (check out the gallery: it really is a visual treat).

I’ve visited Half Cup several times, always finding the brunch menu, which includes Full English, various egg-based dishes and sweetcorn & courgette fritters (which I’ve had in the past) very impressive. I went for breakfast in April and had the excellent pancake stack, with blueberries and mascarpone. Normally I have my pancakes individually, smothered in maple syrup, but these were amazing as they were, so I ate them as a stack, marvelling at how light and fluffy they were. On my return, I had the banana bread with espresso-flavoured mascarpone and pecan nuts. Served warm, it was superb, but incredibly rich and, for once, I struggled to finish it.

When it comes to coffee, Half Cup uses Nude Espresso. In April, I had the Colombian Pijao decaf as a rich, creamy flat white. On my return, I had an espresso using the seasonal blend (60% Brazil, 40% Guatemala). This was excellent, a bright coffee with good body and a front/roof of the mouth taste. It was only after I’d ordered that I realised Half Cup had started serving a guest espresso, otherwise I’d have had that. The staff told me that this was a work-in-progress, but that if it went well, there would probably be another guest espresso on in the New Year (ie about now).

3 thoughts on “Half Cup”