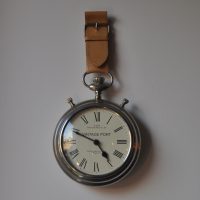 The Pocket, in Belfast, is south of the city centre, down on University Road, opposite Queen’s University. It was one of the places that practically everyone said I should visit, a quirky little spot with some great outdoor seating and an Alice in Wonderland inspired theme, although it’s fairly subtle, so you could miss it if you’re not paying attention.

Although it’s relatively small, there’s a large kitchen tucked away down a corridor at the back which produces a concise but impressive brunch menu, served until four o’clock, while it’s joined by lunch from eleven in the morning. There are also a wide selection of cakes, including some awesome doughnuts, if you want something sweeter.

When it comes to coffee, The Pocket serves only single-origins. There are two options on espresso and one on bulk-brew, all of which change on a monthly basis or sooner if The Pocket runs out. The coffee mostly come from Dublin’s 3FE, although fellow Dublin roasters, Cloud Picker, occasionally makes an appearance on the second grinder. There’s a range of loose-leaf teas from Bristol’s Canton Tea Co served in individual infusers and an egg-timer so you know when it’s done.

Opening at the start of 2016, The Pocket came about because the owner, who manages a letting agency upstairs, wanted great coffee on site. So he converted the downstairs rom an office to a coffee shop and The Pocket was borne. The Alice in Wonderland theme is also the result of the owner’s influence since he’s a great Alice fan. Pages from the book are pasted on one of the walls, while an oversized pocket watch, after which the café is named, hangs just inside the door.

Occupying an old town house in a brick-built terraced row opposite Queen’s University, The Pocket has a generous seating area out front, fenced off from the busy road. There are four two-person tables arranged in a square, all painted with The Pocket’s bright yellow. There’s a good view of the university, but you do risk getting rained on. Alternatively, head inside and grab a seat at one of the three-person window-bars occupying the two large sash windows at the front. The view’s just as good, but there’s no traffic and you don’t get rained on!

To get inside, head past the outside seating to your right and go straight for the doorway ahead, which leads into a hallway with stairs up to the letting agent. The door to The Pocket, reassuringly adorned with “We’re All Mad Here” (Alice again), is on the right, depositing you in the front of the café, which stretches off to your left, where you’ll find the counter at the back.

Tall and thin, it’s perhaps twice as deep as it is wide and just as tall. As well as the aforementioned window bars, The Pocket packs a lot in. Immediately to the left of the door is a cosy, L-shaped bench with a table. A row of tables, a four-person one sandwiched between two two-person ones, runs up the centre, leaving space on the left for customers to get to and from the door/counter. Opposite this, running along the right-hand wall, are three two-person bars which follow the contours of the wall, leading to an indented niche in the middle.

It’s a nice, cosy space and, while I was there, everyone was in for brunch, so all the seats (except the bars on the right-hand wall) were taken, resulting in everyone and everything being on top of each other. The décor is lovely though, with wooden floorboards and furniture, along with white walls and ceiling, the exception being the right-hand wall, which is exposed brick.

The counter’s a simple affair, till on the left, cake in the centre and the bright yellow Black Eagle (there should be a law against Black Eagles being any other colour than black…) off to the side on the right, with the bulk-brew filter on the back wall. The coffee menu is handily-placed on the left-hand wall by the till, while the main menu is on the wall to the right.

My barista recommended the Ethiopian espresso (which was also on bulk-brew), which she said went well as a flat white and she was right. It was a lovely coffee, smooth and fruity, going well with the milk. I paired this with a chocolate custard doughnut. This was a light, fluffy doughnut, coated in plenty of sugar and with an awesome creamy filling.