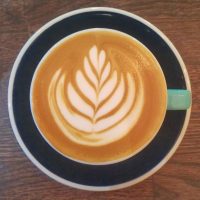 For a long time, speciality coffee in Portsmouth and Southsea was left to the pioneering few, including Canvas Coffee (Portsmouth) and Southsea Coffee Co (Southsea). Recently, however, this has changed, with several number, including Hunter Gatherer Coffee on Southsea’s Albert Road, entering the fray.

The labour of love of a fellow Brian, Hunter Gatherer was many years in the making. In an example of the supportive nature of the local coffee community, when Brian first had the idea for Hunter Gatherer, he knew he didn’t have the coffee know-how, so Canvas Coffee gave him a job, allowing him to gain the necessary skills. After two years at Canvas, Brian found the right location, Hunter Gatherer opening in September 2016.

Serving a house-blend from West Sussex’s Craft House Coffee, Hunter Gatherer also does pour-over, with one option from Craft House and another from a guest roaster, served through either V60 or Aeropress. There is also a brunch menu, now totally vegetarian/vegan, which is available until 3 pm each day. This seems surprising, given Hunter Gatherer’s small size, but appearances can be deceptive. It goes a long way back, with a large, basement-like rear section housing additional seating and the kitchen.

On the north side of Albert Road in Southsea, Hunter Gatherer has a modest storefront, with a central door recessed between two windows which slope in at about 30⁰. This creates a narrow, sheltered spot with enough space for two benches, one in front of each window. With its south-facing aspect, these can be quite the sun-trap, although not at four o’clock on a January afternoon, which is when I visited!

The space itself is an old second-hand bike shop, which had stood empty for some time, Brian cycling past it on his way to work in Canvas Coffee each day. When he got his hands on the keys, it was very dirty and oily, requiring a lot of work to get it up to scratch, although looking at the simple, uncluttered layout, with wooden floor boards and whitewashed walls/ceiling, you would never have guessed its original stage.

The front part of Hunter Gatherer is dominated by a large counter, set back from the window on the left-hand side, while the seating is on the right. There’s a two-person window bar, then, running the length of the right-hand wall, is a long, high-backed chipboard bench with four two-person tables. That’s it for the front part of Hunter Gatherer, creating a quiet, but friendly space, filled with the hum of conversation when I was there. According to Brian, it’s a favoured haunt of the laptop brigade and those looking to hold informal business meetings.

An open doorway in the middle of the back wall leads, via a short corridor and down three broad steps down to a basement-like rear. This consists of two spacious areas, with the semi-open kitchen right at the back and is very much a work in progress, with Brian doing most of the fitting out himself. Like the front part of Hunter Gatherer, the layout is simple and uncluttered, with the space having a very homely feel. The first of the two spaces has another row of tables against a wooden bench, only this one is against the left-hand wall. Meanwhile, on the right, there’s a large, communal table with a pair of benches for seating.

There’s no wall separating the two spaces at the back, just a single, low step marking the boundary, beyond which, things are even more open, with just a single large, communal table with a pair of benches on the left, perpendicular to the wall. This, Brian tells me, is favoured by those with young families and has deliberately been left open to allow space for prams/pushchairs.

Hunter Gatherer’s house espresso comes from Craft House Coffee, using its Industrial blend, a mix of 60% Brazil (Natural) and 40% Colombian (Washed). There’s also a couple of options on pour-over, a relatively new feature. Normally there is one option from Craft House, with another from a guest roaster. While I was there, stocks were rather depleted due to the Christmas break, so there was only the guest option, a washed Ethiopian from Crankhouse Coffee in Exeter.

I tried the Industrial, which Brian recommended either in milk or as a long black, so I went for my usual fall back, a flat white. This was excellent, a rich, full-bodied coffee, full of chocolate notes, that was in perfect harmony with the milk.