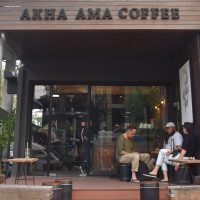 Chiang Mai, in northern Thailand, has a reputation as a foodie heaven. What I hadn’t realised, until I got here, was that it is a speciality coffee heaven too, with a strong emphasis on Thai-grown coffee and with the third-wave philosophy of farm-to-cup put into practice. Without even trying, I had a list of more than 10 places to try, although top of pretty much everyone’s list is Akha Ama Coffee.

A social enterprise, with direct relationships with Thai coffee farmers, Akha Ama has been going since 2010. There are three branches so far, two coffee shops in Chiang Mai itself and a new roastery/coffee shop, Akha Ama Living Factory, about 20km north of the city. The focus of today’s Coffee Spot, Akha Ama Coffee La Fattoria, is the second of the two coffee shops and the one you are most likely to come across since it’s right in the centre of the old city.

Serving a variety of Thai coffee, mostly as blends, but with some single-origins, there’s a choice of both hot and cold/iced coffee on espresso and pour-over. There’s also a decent range of beans which you can buy. If you’re hungry, there’s a limited cake selection.

Akha Ama Coffee La Fattoria is in the centre on Chiang Mai at the western end of Rachadammoen Road, the central east-west artery. It’s also a stone’s throw from Wat Phra Singh, one of the city’s main temples and a major tourist sight. The coffee shop is fairly small, occupying the ground floor of a long, narrow tall building on the street’s southern side, on the corner with a narrow lane.

There’s a large, wooden deck out front, accessed via a short, broad flight of steps from the street. If you can stand the heat/humidity (there are some fans out there) and the noise from the busy street, there are two L-shaped benches at the front, one on either side, and, after another step, two tables at the back, partly sheltered under an over-hanging porch.

Although the interior isn’t fully air-conditioned, it’s much cooler than outside. The front, which is entirely glass, with the door on the left-hand side, leads you into the front part of Akha Ama. This has an enormously high ceiling, and is pretty much a cube. Dominated by the counter on the right, there’s just a narrow bar under a long, thin window, on the left for seating.

You order at the counter before finding a seat, mostly like in the back portion. It’s roughly square, with an extension at the back, effectively a long, thin corridor, running off on the left-hand side. The ceiling is lower here, plus there’s an air-conditioning unit. There are four round, wooden tables, each with three round, padded stools, two on the left, again under a long, narrow window, and two on the right. Retail shelves line the back wall on the right. The corridor, which is quite dark, has a round two-person table and a narrow, rectangular two-person table. A store room at the back houses the old roaster, decommissioned when the Living Factory was opened.

Overall, Akha Ama has a relaxed atmosphere, with the mix of wood and concrete giving it a surprisingly pleasant feel. The main draw, however, is the coffee, operations centred on a sleek three-group Kees van der Westen Spirit espresso machine, its low-slung lines gracing the front window. Side on to the till, you can watch your coffee extracting while you pay. There’s the usual western-inspired espresso-based menu which uses a medium-light house-blend, as well as various iced espresso options using a much darker roast in the second grinder.

Alternatively, there’s a pour-over operation off to your left at the end of the counter. I saw V60 and Chemex in use while I was there, with the menu, chalked up on the wall above the counter, also offering Aeropress. On my first visit, there was a choice of three beans, while on my return on the following day, there were five choices (a mix of blends and single-origins).

On my first visit, I had a Chemex of the light-roast Full City blend, which was served in what appeared to be a hand-thrown handleless pottery mug. This had plenty of body for a Chemex and was a very smooth, drinkable coffee. I paired this with a banana muffin. Served hot, this smelled wonderful and was bursting with bananas.

I returned the following day for a flat white, my first proper milky coffee of the trip. This was wonderful, a rich well-rounded coffee, with classic chocolate notes and smooth, silky milk, pretty much the perfect flat white.

One word of warning: although Akha Ama closes at six o’clock, last orders is around 5:30, so if you arrive much after that, you’re likely to be turned away.