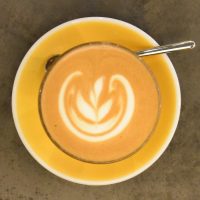 Over Under Coffee is a relatively new name in London’s speciality coffee scene, but one which I’d heard mentioned quite a few times. So, when I had an hour to spare and a desire to escape from the madness that is Piccadilly Circus, I made a beeline for the relative oasis of calm that is Ham Yard, home to the second of Over Under Coffee’s two branches (the other being opposite Earl’s Court station).

It’s a relatively small spot, but that doesn’t stop it from offering an impressive menu. There’s the seasonal espresso from Assembly (which supplies all the coffee) along with a regularly-rotating single-origin on V60, Aeropress or, if you’re in a hurry, there’s a very reasonably-priced batch-brew option. There’s also a decent brunch menu from the kitchen at the back (which stays open until six o’clock), a decent selection of cakes and, on Wednesday to Saturday evenings, cocktails.

November 2018: Sadly, Over Under closed at the end of October (thanks to Giulia Mule for the heads up). However, the Earl’s Court original is still going strong, with a new branch outside West Brompton Station opening in January 2019.

Sandwiched between Piccadilly Circus, to the south, and Soho, to the north, Ham Yard provides welcome relief from both. Tucked away to the right (if entering from the south), you’ll find Over Under Coffee, technically part of the Ham Yard Hotel, but a standalone operation in its own right. A modest, all-glass front, door on the left, windows top and right, gives access to an equally modest (in size) interior. Alternatively, two small tables flank the door out in the yard.

Inside, it’s maybe twice as deep as it i’s wide, with a lovely, high ceiling. To the right of the door, there’s a two-person window-bar, while on the left, a padded bench runs from front to back with two four-person tables at either end, and four two-person tables, all square, pushed together into another two sets of four in the middle. And that’s it when it comes to seating.

The L-shaped counter is on the right, the bottom of the L running maybe halfway across the back, the kitchen behind. The espresso machine, a Mark II Slayer, no less, plus its Mythos 1 and EK-43 grinders, is at the back, facing the door, while the till is in the corner of the L. There’s a display case for the cakes next to that, then comes a chiller cabinet, which marks the start of the counter.

There’s not a great deal of natural light, despite the windows, so there are plenty of light fittings. In a really neat feature, each light bulb hangs above a pot plant, providing lampshade and greenery all in one! While I was there, there was a display of papercuts by Poppy Chancellor hanging on the left-hand wall above the seating.

Over Under uses Assembly’s seasonal espresso, currently a washed Colombian, which the barista recommended with a small amount of milk, so we agreed on a cortado. Alternatively, there’s always a filter option, using one of Assembly’s single-origin filter roasts. This changes regularly, with the team selecting the coffee. A 1 kg bag goes on and when that’s gone, usually in about a week, another coffee is chosen.

My cortado, served in a glass on a pleasing yellow saucer, had biscuit notes in the first sip, with the general result being a well-round, well-balanced coffee. I think that the cortado was a good choice since the coffee may have got lost in a larger volume of milk, I paired this with a mini-loaf with a buttercream topping, which was very fine as well, avoiding the typical failing of being too sweet. Instead, there was a solid, moist base, with a rich, creamy topping with the interesting addition of popcorn.

As a bonus, I met the owner, Ed, who was sitting in the corner, working on his laptop. It’s always a good sign when a coffee shop owner patronises his own establishment!

3 thoughts on “Over Under Coffee, Ham Yard”