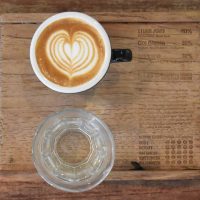 I’ve made (and will continue to make) much about Chiang Mai’s speciality coffee scene and its championing of Thai-grown coffee. However, it would be wrong to give the impression that this is all there is. There are also plenty of internationally-inspired places roasting/serving coffee from around the world. And where better to start than with Chiang Mai pioneer, Ristr8to, which boasts amongst its many achievements current world latte art champion, Arnon Thitiprasert, as head barista?

Ristr8to is a roaster and chain of four coffee shops, two Ristr8tos and two sister shops, under the name Doppio. The subject of today’s Coffee Spot is Ristr8to Lab, the second Ristr8to and, as well as a coffee shop in its own right, home to Ristr8to’s 6kg Giesen roaster. Serving a bewildering array of espresso-based drinks using its Black Hand blend and a different single-origin every month through no fewer than six filter preparation methods, it’s a real treat for coffee lovers.

However, you don’t have to be a coffee geek to appreciate Ristr8to. It’s a lovely spot with seating outside on the terrace or in the air-conditioned interior, plus there’s table service and a dedication to hospitality that I’ve come to expect in Thailand.

Ristr8to Lab is in Nimmanhaemin, a relaxed, modern district to the west of the old city, with broad, relatively traffic-free streets, in many ways a million miles from the bustle of the centre. The lab is located at the eastern end of Nimmana Haeminda Road Lane 3, with the original Ristr8to at the other end of the lane! Long and thin, it runs lengthways along the street, giving it a massive shop front. There’s a narrow concrete terrace slightly above street level, running the full width of the shop, behind which are two sets of French windows which, when it’s not too hot (ie first thing and last thing each day), can be folded back to join the interior with the terrace. Two flights of three steps are cut into the terrace, one on the right and the other slightly offset in the centre. These middle steps funnel you towards the left-hand set of doors which function as the main entrance.

Each half of the terrace has two small, rectangular four-person tables with benches for seating, all bolted to the floor. Since there’s table service, you don’t have to go inside if you don’t want to, but if you do, you’ll find the concrete theme continuing, with bare-brick walls at the back/left, where things are dominated by the counter, a wooden affair. This is against the back wall, taking up almost of the left-hand side, with the roaster tucked away in a corner to the left.

The bulk of the seating is off to the right, where Ristr8to shares the building with a waffle/cake shop which has about ¼ of the space at the far (right-hand) end. There’s no wall between the two, which is interesting, but there’s a clear delineation, Ristr8to ending on the right with a long wooden bench, three two-person tables lined up in front of it, each with a short, wooden bench on the other (Ristr8to) side. Like the furniture outside, these are all bolted to the floor. Between the tables and the counter is a very thin, eight-person bar/table with seating provided by low stools.

Finally, there’s a brew-bar at the back on the right-hand side, running the full width. There’s an uber boiler on the right and an EK-43 on the left, the rest of the counter left open for the brewing using one of V60, Clever Dripper, Woodneck, Chemex, Aeropress or Syphon. You can sit here on one of two bar stools if you like.

Ristr8to has an extensive and informative menu, one of the best I’ve seen. For those intimidated by the vast array of signature drinks and cult coffees from around the world, head for page 6, where you’ll find the old classics. I’d already tried the Black Hand blend at Doppio, where I had an espresso, but I couldn’t come to the home of the world latte art champion and not have something milk-based, so I went for a cortado.

This was beautifully-presented on a wooden tray with a glass of warm water, the tray etched with details of the blend (40% Thai, 30% Mexican, 30% Guatemalan).  Each table also had a wooden tray with a bottle of water and some small glasses: such attention to detail. The cortado was gorgeous, very short (served in an espresso cup) and with a very rich, biscuity flavour. The milk went superbly well with the espresso, its sweetness adding to and enhancing the coffee’s natural flavour. Simply awesome!