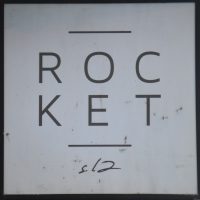 Rocket is a small chain of upmarket all-day brunch spots in Bangkok, serving some excellent coffee from the local Phil Coffee Co. This branch, Rocket S.12, is in the Silom district, east of the river, an interesting area of modern skyscrapers, interspersed with older, colonial-style buildings, where major, traffic-filled arteries, are interwoven with quiet, narrow lanes, all cut through by the concrete pillars of the elevated railway, making it a relatively easy destination to get to. I am, by the way, indebted to Lan Din Coffee for the heads-up about Rocket.

Rocket occupies a square space with a very modern/Nordic feel to it, all light woods and with a tiled floor. It shares the building with the restaurant next door (there is an open, connecting doorway at the back) but the two are separate businesses. There’s a very western-themed all-day brunch menu, backed up by a house-blend and decaf on espresso, plus five single-origins on pour-over, using a mixture of home-grown Thai coffee and various familiar origins from around the world. It’s also one of the few coffee shops that I came across in Thailand that takes credit cards, useful if it’s your last day and you’re short on cash!

Rocket S.12 is on a relatively quiet side street, occupying the left-hand side of a building on the corner of an even quieter alley. A pair of two-person tables sit outside on the main street with three four-person tables down the alley to the left. The former shelter under a large, overhanging concrete porch, while the latter are on a slightly-raised wooden platform under a metal awning, both offering good outside seating options.

Both sides are lined with wide, floor-to-ceiling windows. At the front, glass double doors take the place of the right-most window, while around the corner, the three windows are in fact French doors, although only the back pair seemed to be in use.

Inside, the air-conditioning provides welcome relief from Bangkok’s humidity. An almost-island counter at the back/left dominates the space, occupying about two-thirds of the space. Six chairs line the right-hand side with a further two at the back, while the front of counter is left open. The space between it and the windows at the front holds two four-person tables, each with a bench on counter side and two chairs on the window side.

The till (where you pay when you leave) is off to the left, around the side of the counter, by the last set of French windows, while there’s a long stand-up bar along the right-hand wall, although no-one seemed to be using it. A pair of long mirrors sit above the bar, effectively occupying the whole wall, while at the back a connecting doorway leads to the restaurant next door. Finally, the back wall and part of the left-hand wall behind the counter are lined with retail shelves, with just a small gap in the left-hand corner which leads to the kitchen.

Rocket offers full table service, so take a seat and the staff will bring you a menu. Rocket made its name as an all-day brunch venue, and it doesn’t disappoint, with the multi-page menu showcasing various western classics, including numerous combinations of eggs on toast. However, I indulged myself and had some divine pancakes. I was served two, thick, fluffy, light pancakes, topped with honey, cream, banana and flaked macadam nuts. These were really crunchy and I had to convince myself that I wasn’t eating broken egg shell which had been left in the pancakes by mistake!

If you decide to sit at the counter, you can watch the espresso being made on the two-group Synesso which is on the left-hand side of the counter, facing the seats along the right-hand side. Alternatively, if someone orders pour-over, this is made right in front of you (unless you’re sitting at the back). Talking of which, the coffee is top-notch too, all from local roasters, Phil Coffee Co.

Rocket is one of the few places I found serving decaf, which takes its place on the espresso machine alongside a house-blend of beans from Mexico, Laos, Guatemala and Indonesia. There’s also filter coffee available through Aeropress, Aeropress (short) and V60. There were five single-origins from Kenya, Ethiopia, Nicaragua and Colombia, with the bags on the counter next to the filter station. However, I made a bee-line for the local option, a washed coffee from Chiang Rai, which I had as a V60, served in a glass tea pot, a lovely pottery cup on the side.

The tea pot was deceptively big, holding several cupfuls, while the coffee itself was subtle, very gentle and extremely drinkable, the perfect accompaniment to my pancakes. My only (slight) criticism is that I could have done with a glass of water to go with it all.