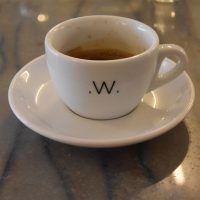 Amsterdam has an enviable collection of well-renowned coffee shop/roasters, but none came more highly recommended to me than White Label Coffee, out in West Amsterdam. So when I found myself in the neighbourhood, on my first day in the city after World of Coffee, naturally I had to go.

White Label has been going for four years from the same spot on Jan Evertsenstraat, although roasting now takes places in a dedicated facility a few doors away. There is a 6 kg Giesen roaster at the back of the store, but this is only used on Mondays to roast the filter coffee. For the rest of the time, White Label Coffee is just a regular coffee shop, with perhaps the weirdest shape I’ve ever seen…

When it comes to coffee, White Label Coffee roasts numerous single-origins, all of which are for sale in the shop. When it comes to serving coffee, any of the filter roasts are available as a V60, with one selected each day for batch brew. Meanwhile, White Label Coffee offers two choices on espresso, putting on four kg at a time and changing it when it’s gone, which often means more than once a day!

In a world of weirdly-shaped coffee shops, there’s a special place for White Label Coffee. Long and thin, it has what can be best described as a broad hump in the middle, running the width of the shop.

Set in a parade of modern(ish) shops underneath a row of flats on the busy Jan Evertsenstraat, things begin rather conventionally with a large picture window occupying the front, glass door inset to the right. You can sit outside if you like, with a long bench to the left of the door and a much smaller one to the right.

Inside, there’s a two-person trestle table/window-bar, while opposite that, facing the window, is a large, two-person sofa. Occupying the space along the wall between them are a set of retail shelves, selling coffee and coffee-making kit. Meanwhile, a long bench runs along the wall to the right of the door.

And then things get weird.

Two broad, platform-like steps running the width of the shop, lead up to the counter, which is maybe two metres above the floor level. This is deliberate, since it houses a large store room underneath the counter, accessed via a small door to the right. It is, shall we say, an interesting feature, and a fascinating use of the space.

There’s a clear path which leads back and up from the door to the counter. To the right, there’s a pair of chairs on the first step and then a sort of cubbyhole/cloakroom where the second step should be which gives access to the storeroom. On the left, a long single-level table begins at floor level by the counter and runs towards the front of the shop. At the front, on the first of the two steps, it’s a normal-height table, with a pair of chairs on either side. On the second step, however, it’s a low table with three cushions each side, where you sit either cross-legged or with your legs stretched out under the table.

The counter, a two-part affair, is at the top of the steps on the left while, on the right, a four-person storage cabinet which doubles as a four-person table faces the counter. Off to the left, in front of the counter, a pair of chairs with a crate as a coffee table, survey the coffee shop.

However, there’s more, White Label continuing beyond the hump, where two more steps lead down, the first one narrower than the others, leaving space for a relatively large seating area at the back, which is once again on ground level. There are a pair of sofas here, one on each side, with a couple of chairs each.

Right at the back, the toilet extends from the back wall, leaving a narrow shelf above, lined with plants and accessed via a steep flight of steps on left. Right at the top is a solitary armchair with surely the best view in the house, looking out across the entire coffee shop, although in reality, you can only see as far as the counter…

I had a gorgeous Rwandan espresso, which was bright, fruity and well-balanced, although I don’t have the taste vocabulary to do it justice. I paired this with a slice of the apple pie. Fresh out of the oven, the smell hit me as I stood at the counter, which is, in my opinion, deeply underhand tactics. Apple pies are often disappointing and bland, but it’s apple pies like this that made me fall in love with them. Rich pastry, sweet, soft chunks of apple, crispy, cinnamon topping: all it lacked was a dollop of ice cream on top.