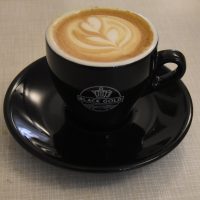 I didn’t have very long to explore Amsterdam’s speciality coffee scene when I visited the city for the World of Coffee in June, but I noticed that the majority of places are outside of the centre, often to the south or west. In contrast, Black Gold, on a quiet, residential street, is just a short walk east of the red light district, making it one of the more easily-accessible speciality coffee shops for those on a more traditional tourist itinerary.

Black Gold is both a coffee shop and vinyl record shop, part of a small band of such establishments around the world. The front is given over the vinyl, although there is some seating and you are welcome to sit there with your coffee. Alternatively, there are a few more seats in the spacious rear of the shop. When it comes to coffee, Black Gold uses local roasters White Label Coffee, with a single-origin on espresso, where it’s joined by a guest roaster. There are also three single-origins on filter through V60, Aeropress, cafetiere and batch-brew, with the same single-origin guest espresso also available as one of the filter options, an innovation which only started in June.

Black Gold is on Korte Koningsstraat, a short, narrow street lined with tall buildings, an extension of Koningsstraat which runs southeast from the red light district. It’s also under 15 minutes’ walk from Amsterdam Centraal, the city’s main train station. In a city which, like London, has a speciality coffee scene heavily influenced by Australians, it’s also very Dutch in origin, the owner, Siebrand, having funded it through a successful Kickstarter three years ago.

The space is surprisingly large and deceptively simple, occupying the entire ground floor of four-storey brick building. Long and thin, the door’s on the left, with a large, picture window on the right, which, between them, occupies the full width of the store. Inside, the front section is clearly a record store, with shelves full of vinyl records on the right-hand wall and a box with more in the centre of the room. The effective demarcation point is the counter, which starts about halfway back on the left and runs along the left-hand wall.

There’s a small amount of seating in the front, with an armchair in the right-hand corner by the window and another in front of the counter on the left. Meanwhile, along the right-hand wall, between the record shelves, are a couple of chairs that wouldn’t look out of place in a school. The majority of the seating, however, is at the back, beyond the end of the counter, where Black Gold widens a little on the right. A couple of padded benches run along the right-hand wall with a built-in coffee table, with another table on the left, beyond the counter. Finally, there’s a lovely little niche in the back wall, windows on three sides, lined by wooden benches. It’s also replete with power outlets, making it the place to go if you need to recharge your phone.

The counter, a long, thin affair, has a two-group La Marzocco Linea espresso machine on the front, facing the door, along with its twin grinders. The till’s a little further down, which means that when you’re ordering, the Linea’s side on to you, letting you watch your espresso being made. You’ll find the filter options down here too, while at the far end, there’s a very impressive turntable/sound system.

Black Gold uses Amsterdam’s White Label Coffee as the house coffee, with its single-origin Brazilian on espresso. Meanwhile, this is joined by the guest roaster on the second grinder, which changes every month. While I was there, the guest was another Amsterdam roaster, Sweet Cup, with a washed Rwandan Jarama, which you can also try as one of the three single-origins on filter.

Having had some of White Label’s coffee (admittedly another Rwandan, rather than the Brazilian) when I was at White Label the day before, I decided to go with the guest, which Siebrand recommended with milk. I had a flat white, served in a tulip cup. Siebrand was right, of course, it did go well with the milk, but the coffee was strong enough that its subtle, fruity flavours came through the milk’s sweetness, leaving me wishing that I’d had the time to try it on its own, or, indeed to sample it as a pour-over. Alas, I was meeting with a friend, Niall (for the annual off-season gathering of the Surrey Scorchers’ TV Commentators’ club), back at Amsterdam Centraal, and so had to run.

As usual, when it comes to places European, I was beat to Black Gold by the Bean There At team. See what they made of it when they visited in March 2018.