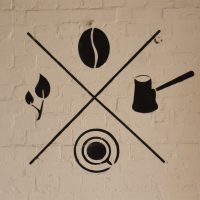 Craving Coffee celebrates its fourth birthday this year, a pioneering outpost of speciality coffee in northeast London, which is not somewhere I venture very often. While Craving Coffee has been on my list for a while, I am indebted (again!) to my friend, Daniel Stevens, who gave me the excuse to visit. A café, bar, community hub and evening social, Craving Coffee is also an art gallery, where different artists exhibit each month. And this month (August), exhibiting for the first time, is Daniel, who held his launch party on Friday, the excuse I finally needed to drag myself out to Tottenham and visit Craving Coffee.

When it comes to coffee, Craving Coffee uses Climpson and Sons, with the Baron blend on espresso, plus decaf and (usually) a single-origin on pour-over through the V60. During the day, there’s an extensive menu, including breakfast, lunch and cake, with all the meals cooked in the open kitchen behind the counter. This closes at 4pm, but on Thursday, Friday and Saturday, it re-opens in the evening as Craving Coffee hosts a different pop-up each week as the Tottenham Social. Finally, Craving Coffee is fully licenced, with a three-page menu feature beer, cider, wine and spirits.

Midway between Seven Sisters and Tottenham Hale, Craving Coffee is tucked away down Markfield Road, as superficially an unpromising location as I’ve ever seen. Yes, I know it looks as if you’re walking down an industrial estate (probably because you are), but have faith, because there, halfway down the street on the left, at the back of a car park, is Craving Coffee.

Despite the unpromising start, you won’t find many better coffee shops. Long and thin, Craving Coffee occupies what feels like an old garage. There’s a small outside seating area in the car park, with a pair of picnic tables flanking the front, which, being all glass and west-facing, lets in the afternoon sun. Inside, Craving Coffee is long and thin, with high ceilings. There’s a seating area at the front, then, occupying maybe the back two-thirds, on a slightly raised platform, is the counter.

The front section has a small table immediately to the right and, on the left, a two-person bar. The majority of the space is occupied by a large, eight-person communal table running front-to-back, while beyond that, a second bar, with five chairs, runs along the right-hand wall and across the back, under the counter.

The second part of Craving Coffee is accessed via a shallow ramp on the left. The bulk of the space at the back is occupied by the counter, which takes up the entire right-hand side, with a long bench running along the left-hand wall. This has five tables, three two-person ones, interspersed with two four-person ones. The décor is simple, with a concrete floor, whitewashed brick walls and a black ceiling.

The espresso machine, a two group Synesso, is on the front of the counter, facing the doors, with its grinders to the right, while the coffee menu is on the wall to the right. The Baron blend from Climpson and Sons is on espresso, while there’s a different option on pour-over every few days.

I decided to have the one-and-one, a single espresso with a piccolo, served, respectively, in a cup and a glass. The espresso was excellent, beautifully well-balanced and very smooth. Two sips and it was gone. The piccolo, meanwhile, featured some awesome latte art, the coffee going perfectly with the milk, not too strong to mask the milk’s sweetness, but not too weak that all you couldn’t taste it. I paired all this with a dark cherry and marzipan slice, which was just as good, with a strong almond taste from the marzipan, and a rich, light cake.

My main reason for coming was to attend Daniels’ launch party. I’ve known Daniel for many years, having first met him at the Coffee Stops Awards in 2014 when, in a previous life, Daniel was a coffee blogger (Cups of London Coffee). However, he’s also a self-taught artist and it was great to both catch up and see his works (which you can check out in the gallery). If you are interested, get down to Craving Coffee before the end of the month to see them in person, or, if you can’t make it, head over to his Etsy shop where you can buy prints and cards, as well as the original works of art.

December 2018: Craving Coffee has won the 2018 Most Unlikely Place to Find a Coffee Spot Award.

May 2021: Craving (which has dropped the “Coffee”) has moved across the road. You can see what fellow blogger Bex made of the new location when she visited in May.