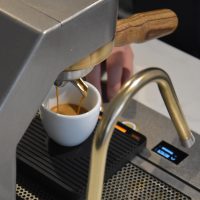 Liverpool’s Bold Street is no stranger to great coffee, with the eponymous Bold Street Coffee leading the way for many years. More recently, it’s been joined by a host of others, including, on nearby Wood Street, Mother Espresso, and now, on Bold Street itself, Ropes & Twines, which describes itself as a “Coffee and Wine Room”. Perhaps taking the lead from the likes of Filter + Fox, Ropes & Twines offers coffee and wine in a high-class setting, including a rather awesome set of cellar rooms, along with sandwiches, cakes and charcuterie (the only other coffee shop I can think of offering coffee, wine and charcuterie is London’s Fernandez & Wells).

When it comes to the coffee, there are two single-origins, one on espresso, one on pour-over, both roasted for Ropes & Twines by Maude Coffee in Leeds. In keeping with the elegance of the setting, Ropes & Twines has dispensed with the usual bulk of the espresso machine, instead going with what I believe is the UK’s first Mavam espresso system outside of London. This modular system hides the boilers and pumps out of the way, just leaving the group heads and steam wands rising above the counter.

When I visited Ropes & Twines at the end of July, following a tip-off from the lovely folks at Neighbourhood Coffee, it had been open a whole seven weeks. The slightly unusual name, by the way, comes from the area’s maritime heritage, when rope-making was a major industry in the days of sail.

Ropes & Twines has a narrow front on Bold Street, with a wide pair of double doors, slightly inset, flanked by small, angled windows. Off to the right, another window acts as a display case, while to the left, where you’d expect a similar window, a door leads to the offices above Ropes & Twines.

Inside, it’s long, thin and goes a long way back. So far back, in fact, that there’s a back door which opens onto Wood Street, not far from Mother Espresso. There are three counters/bars down the right-hand side, with the first counter immediately to the right of the door, where you’ll find cakes and other goodies. You can order here, but it’s mostly for takeaway customers, since Ropes & Twines, in keeping with the high-class setting, offers full table service.

The second counter has the coffee, while the third counter, which is more of a bar, offers wine and charcuterie. You can sit at the counter (six chairs) and the bar (eight). There’s more seating on the left, starting with two long, narrow benches running along the wall, immediately next to the door. These are followed by a baby grand piano, then an open staircase leading to the cellars. Finally, opposite the bar, a long, padded bench has five round, two-person tables.

After this, Ropes & Twines narrows on the left, leaving a final seating area beyond the third counters, starting with a pair of sofas facing front/back across a coffee table. This is followed by four comfy chairs surrounding a coffee table, facing a wood-burning stove, and then the back door, with an airlock arrangement. To the left, another pair of comfy chairs face each other across a coffee table against the left-hand wall, with four more clustering around a table under the window in the back wall left.

The stairs lead to a series of vaulted cellars with stone-flagged floors. The wine-cellar is at the bottom of the stairs, with the toilets next to it, then, at the front, the kitchen. To the left, a long, vaulted cellar is used as a seminar/wine-testing room. There’s a long, communal table in the centre, with a padded bench on the left with four round tables under the stairs. At the back, there are three more clusters of four comfy chairs, with light from a light-well in the back wall.

The coffee counter starts with a display of the retail bags, in Ropes & Twines colours.  Sparse and uncluttered, the counter-top is punctuated by the Mavam espresso system’s twin group heads and steam wand, followed by a Marco Beverage Systems Über boiler, with still and sparkling water on tap at the counter’s end. The Mavam’s stainless steel finish matches the Über boiler and taps, although the black bulk of the Mythos One grinder off to one side rather spoils the lines!

There are four single-origins available, with a washed Colombian La Granja on espresso. Meanwhile, the pour-over option changes every few days, drawn from the remaining single-origins. Naturally, I had to have an espresso, which was served in a classic white cup, with a glass of sparkling water on the side. The coffee itself was lovely, really rich, fruity and full-bodied, proving that the Mavam is not just a pretty piece of kit.