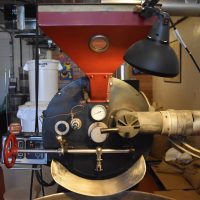 On my recent Midwest road trip, I planned most of my stops around where I might find good coffee. Appleton, in eastern Wisconsin, near Lake Winnebago and half-an-hour southwest of Green Bay, is one such example. Not top of my list of places to visit, it was a cheap base from which to explore Door County, with the added attraction of Uncommon Grounds Specialty Roaster.

Tucked away at the end of small row of industrial buildings at the west end of town, Uncommon Grounds is not the sort of place you’d accidentally wander by, but it’s worth a visit if you’re in the area. First and foremost a roaster, the front part of the store is a spacious, relaxed coffee shop (similar to Rave Coffee Roasters), where you can order coffee, buy beans and, perhaps best of all, chat with Dan, the owner and head roaster.

Uncommon Grounds has a range of blends and single-origins for sale, one of which, the Trieste blend, is available on espresso with the usual selection of drinks, while there’s a rotating option (a natural Brazilian during my visit) on pour-over through the V60. There’s also a small selection of cakes if you are hungry.

I forget precisely how I came across Uncommon Grounds Specialty Roaster (I think it was twitter), but at some point it attracted my attention enough for me to put a star on it in Google Maps. Beyond that I knew very little about it, so my visit was filled with more than my usual amount of curiosity. As I’ve said, it’s not the sort of place you accidentally wander by, half away down a dead-end road at the western end of town that runs parallel to I-41, the freeway running through Appleton.

Even when you get there, the small row of industrial buildings that’s home to Uncommon Grounds is set well back from the road, so you could easily drive past without noticing. However, have faith and head down the drive, where you’ll be rewarded by the sight of Uncommon Grounds at the near end of the row of buildings, the “Open” sign twinkling in the windows (although be aware of the reduced Fall/Winter opening hours in the table below).

There’s a picnic table outside to the left of the door, but you’ll need to head inside to order, where you’ll find a large, welcoming room. There’s a makeshift L-shaped counter on the left, the seating on the right, while right at the back, beyond the seating, is the heart of the operation, the roaster itself.

Most customers come either to buy beans, which are arrayed along the front of the counter, or for takeaway coffee, but if you want to stay, there’s quite a range of seating. There are a couple of stools at the counter itself, where you can watch Dan making the pour-overs on the V60, or at work on the single-group La Marzocco Linea espresso machine behind the counter, while there’s a cocktail table with two more stools at the end of the L-shaped counter.

Alternatively, to the right of the door, a long window-bar runs along the three front windows, before wrapping around to the two windows at the side. If you want more space, there’s a six-person, oval communal table in the middle of the room, while a solitary, but rather splendid, armchair occupies the back corner diametrically opposite the door.

Finally, if you’re interested in the roasting, there’s a counter at the back, looking into the roastery, where you’ll find a couple of chairs. Taking centre stage in the roastery is the 15kg Roure roaster from Spain. Dan’s been roasting for six years, sourcing coffee from the same eight origins each year, producing a range of blends and single-origins.

Uncommon Grounds is an open, friendly place, so unless Dan is out back roasting, you’ll find yourself sitting up front, chatting with him, which is what happened to me. I started off with a pour-over, a natural Brazilian through the V60, which Dan made straight into my Therma Cup (Uncommon Grounds is set up for mostly takeaway customers, so don’t forget to bring your own cup).

This turned out to be a lovely, smooth coffee, bursting with flavour, which I paired with an equally lovely blueberry muffin in lieu of breakfast. I then shared an espresso on the house with Dan. This was made with the Trieste blend, a deliberate homage to the darker roasts of northern Italy. It includes a splash of Indian Robusta, so it won’t be for everyone. I enjoyed it, but it was darker than I prefer my espresso these days.

Before I left, Dan filled me in on the local coffee scene, which included the excellent Discourse Coffee in Door County, which I never would have otherwise found.