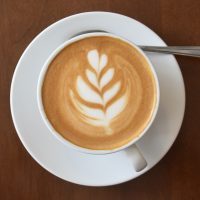 Balham, in south London, isn’t short of good coffee. There’s the venerable Camden Coffee House by the station, and the equally venerable M1lk. More recently, these have been joined by a branch of Brickwood, a couple of doors down from M1lk on the busy, pedestrianised Hildreth Street, while, just around the corner on the more subdued Bedford Hill, there’s the subject of today’s Coffee Spot, Escape the Daily Grind.

Serving the dependable Full Steam espresso from Volcano Coffee Works, offering a simple brunch menu until 3 o’clock and supplementing that with a selection of very tempting cakes, pastries and tarts, Escape the Daily Grind does a few things and does them well.

This is all served in a bright, relaxed space a million miles away from the hustle and bustle of M1lk and Brickwood, which are just a street away. In fact, if you knocked through the back wall of Escape the Daily Grind, there’s every chance you’ll end up in Brickwood… I was there on a Saturday lunch time, and while every table was taken in Brickwood and M1lk, with queues out of the door, Escape the Daily Grind offered a choice of tables and a quiet, relaxed atmosphere.

Escape the Daily Grind, which opened in June 2015, has an old-fashioned shop-front style façade on Bedford Hill (which, by the way, is about as flat a “hill” as I’ve ever seen!).  There are two large, square windows on the left, then, inset on the right, is the entrance, with the door at the back on the left, which takes you into the front of Escape the Daily Grind on the right. The interior is rectangular, maybe twice as deep as it is wide and the layout is pretty simple. The counter is in the middle of the left-hand wall, facing the door, while the seating is arranged around the edges.

Starting to the left of the door (which opens to the left), there’s a two-person table in the window at the front, which, when the door is open, is almost in a world of its own. Next to this is a six-person communal table that runs perpendicular to the window and then, beyond that in the left-hand corner, are two more two-person tables. The first is in the window, while the second is tucked away in front of the counter.

Next comes the counter itself, a makeshift affair of tables and what looked to me like filing cabinets, which enhanced Escape the Daily Grind’s somewhat eclectic atmosphere. The cakes and till are to the fore, while the espresso machine is at the back. Moving on, there are a pair of sofas beyond the counter in the back corner on the left, facing each other across a coffee table, while there’s another two-person table in the middle of the back wall.

Overall, it’s a bright, friendly, relaxed place, far from the busy, bustle of Hildreth Street. There’s a place for both, and while I enjoy the buzz of the likes of M1lk and Brickwood, I’m glad that there’s the oasis of quiet, aka Escape the Daily Grind, that I can retreat to. I also like the travel theme, which reminds me of Four Corners around the back of Waterloo. Escape the Daily Grind is decorated with maps, while there are two bookshelves of travel guides for you to peruse.

As I’ve said, Escape the Daily Grind does a few things and does them well. I started with a flat white using the Full Steam espresso from Volcano Coffee Works, its standard espresso offering, made with Peruvian beans. I’ve been enjoying it in coffee shops around London for many years and this was no exception. I had a very fine flat white, rich and full-bodied, just what I’ve come to expect. The other component, the milk, comes from Brades Farm, one of a handful of dairies offering milk specifically for the coffee industry. Steamed to perfection, it held the latte art right to the bottom of the cup.

As well as coffee, I was there for lunch, selecting the scrambled eggs on sourdough toast. I was rewarded with some light, fluffy, creamy eggs on crispy toast, pretty much perfect.

1 thought on “Escape the Daily Grind”