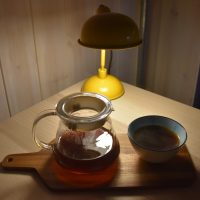 The Scandinavian Coffee Pod is in the heart of Cheltenham, around the back of Royal Crescent at the end of the Studios, a low, single-storey building shared with neighbours, Studio Coffee Roasters (if you think The Pod is small, stick your nose in there!), and several other businesses. It’s almost square, being slightly wider than it is deep, and is open all the away to the A-frame roof, helping give it a sense of space. Meanwhile the left-hand wall slopes at around 30⁰, making the back is slightly wider than the front. And then there’s The Pod.

The Scandinavian Coffee Pod originally occupied a literal cube, a steel-framed, glass-walled cube that measured just over 2m along each side. This has been embedded into the front, on the right-hand side, rotated by 45⁰. It houses part of the counter, home to the bright yellow espresso machine and its grinders. There’s a door here, handy for takeaway/access to the counter, while there’s another in the window to the left (the front is entirely glass).

The Pod notwithstanding, the rest of the layout is fairly straightforward. The main part of the counter, where you’ll find the cakes and sandwiches, with the menus on the wall behind, is on the right, seating on the left. This is mostly square, two- or three-person tables with a mix of chairs, low stools and narrow benches. Two of these are against the back wall, while another two are in the middle, one by the counter, the other near the left-hand wall. There’s one more at the front, in the window by the door. The remaining seating is in the corners, a pair of armchairs at the front-left and a long, narrow four-person table with a pair of benches in the back-left corner.

The interior’s done out in light wood, with long, vertical planks forming the walls and large wooden squares on the floor (although I suspect it may be laminate). The counter is also wood, as is most of the furniture, while the roof and its supporting beams is made of dark wooden planks. Incongruously, the interior wall on the right behind the counter is corrugated iron.

While I was there, there was a washed Nicaraguan on espresso, plus a very tempting Ethiopian from Drop Coffee on filter, but I was drawn to the natural Brazilian from Studio. The coffee, by the way, changes regularly, sometimes every week, but if the staff like it, it can stay on for a month or two.

My coffee was served in a carafe on a wooden platter, with a beautiful ceramic bowl/cup on the side. It was an interesting brew, not quite the fruity, full-bodied natural that I’m used to. This had quite a rich, dark flavour and was surprisingly bitter. I got chatting to Abby, the manager (next week is her last week, by the way; she’s moving to London) and she made me the house special, the Scandinavian filter, another V60-based drink using the same Brazilian coffee.

I’m not a fan of putting things in my coffee, but I honestly preferred this to the unadulterated version, finding it sweet, but not overly so. At my request, Abby only told me the (not so) secret ingredients, a small amount of crystallised ginger and cardamom, after I’d finished. In fairness, I’d have never guessed and, despite my inherent prejudice, I rather approve!

I paired my coffee with a delicious friand, an excellent cake with a centre of jam and cream, with another blob of jam on top. It was, in effect, a Victoria sponge in friand form (I’ve since been told that it was a lingonberry and cream cheese cake). Either way, I wholeheartedly approve!

1 thought on “The Scandinavian Coffee Pod”