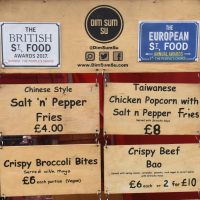 Welcome to the second of my detailed write ups of the third annual Birmingham Coffee Festival. I can’t believe a whole month has gone by since I was in Birmingham, exploring all things coffee. I got things underway with my write-ups by starting with traditional festival round-up, before moving on to talk all about the wonderful roasters I met in the Meet the Roasters feature. Today it’s the turn of all the lovely food-related stuff I found at Birmingham Coffee Festival, while the final post in the series is a general round-up of everything else.

I’ve said it before, but it’s worth saying again: Birmingham is one of the better catered coffee festivals, which is important to people like me who are going to be there all day. Yes, with the wristband system, you can pop out and get something to eat at one of several excellent cafés in the Custard Factory (the festival’s venue) but ideal I want something I can quickly grab, eat and get back to the action, which is where the excellent street food village came in.

However, it wasn’t just the street food. This year, we also had plenty of cake stands, led by old friends, Cakesmiths, while there were also chocolate companies and a specialised Turkish catering company.

You can see what I got up to after the gallery, which starts with a tour of the street food village.

The Street Food Village at last year’s festival was one of the highlights, while this year’s was even better, with more stands and a good mix of meat, veggie and vegan options. Starting with the more meat-orientated vendors, there was What The Cluck, purveyors of fine fried chicken, and the Salty Dogg, who were dishing out hot dogs. Moving on, Bare Bones Pizza, a wood-fired pizza company with couple of vans, one of which made an appearance at the weekend tempted me greatly, as did The Paneer Wrap Street Food Company, which was providing vegetarian paneer wraps.

However, the two street food vendors who did win my business were Wayland’s Yard and Dim Sum Su, both of whom were there all three days. I was drawn to the Wayland’s Yard stand by the promise of eggy crumpets, egg-dipped crumpets, fried halloumi and chilli jam, which turned out to be every bit as good as they sounded. Wayland’s Yard is a chain of two coffee shops known as much for its innovative food as for its coffee, with the original in Worcester, and a second in Birmingham, which I visited last year. Not that I knew it was Wayland’s Yard at the time, since the staff had forgotten their sign on Friday!

Come Saturday I would have been quite happy to have eggy crumpets again, but I thought I’d better try something else. Instead my eye was drawn to the bright red stand of Dim Sum Su, which I recognised from several appearances at Manchester Coffee Festival over the years. Sue had brought her Dim Sum and Pan-Asian street food down from Manchester, with an eclectic selection of Bao and a few other bits besides. I had the Crispy Taiwanese Aubergine Bao (and couldn’t resist a side of Salt ‘n’ Pepper fries). For those not in the know, a Bao is a steamed bread bun, a wonderfully fluffy affair, which is used to hold the filling (think of a fluffier, softer version of a pitta).

So that was me fed, at least when it came to savouries. But what about the sweet things? You can find out more after the gallery.

There were plenty of cake stands at this year’s Birmingham Coffee Festival. I don’t remember seeing this many at another other coffee festival. However, with a couple of instances where I strayed (for example, the fantastic doughnuts on the Origin stand, which I wrote about in my Meet the Roasters feature, I kept finding myself drawn back to that perennial festival favourite, and old friend of the Coffee Spot, Cakesmiths.

I usually start my days at any coffee festival with a slice of Smashing Pumpkin Bread (or something similar) in lieu of breakfast at the Cakesmiths stand and Saturday morning was no different. It’s always a pleasure visiting the stand and catching up with the team, particularly to see what Mike (whose job title is “The Cake Inventor” – how cool is that?) has come up with. This time it was a Rhubarb ‘n’ Gin tray bake, a new one to me. I also had a slice of the Queen Vic, Cakemsiths’ tray bake take on the classic Victoria Sponge. It is simply awesome, a wonderfully light sponge, rich, creamy and jam filling.

From old friends to a new one in the form of Bedouin Nights, a Turkish catering company based in Coventry. I was initially drawn by the lovely Turkish coffee set, but found the whole stall enchanting. There were various savoury snacks, sweet treats and Turkish tea, although what really caught my eye, naturally enough, was the Turkish coffee. I’ve been fascinated with this ever since having a masterclass on the cezve (aka the ibrik), the traditional Middle-eastern coffee pot.

Boudin Nights uses a machine to prepare its Turkish coffee and, naturally, I had to try some. The resulting coffee was very similar to that you get from making it manually with an Ibrik, a rich, dark coffee with a slightly muddy taste and a large dose of sludge at the bottom! Don’t make the mistake of trying to drain your cup with this one! I paired this with a slice of baklava, one of my favourite sweets. If you don’t know baklava, it’s rich, sweet and sticky, made from layers of flaky pastry held together with syrup or honey and topped by nuts. This one was excellent, by the way.

So that was my sweet tooth satisfied, although I wasn’t done with sweet things. You can find out more after the gallery.

Finally, on the topic of sweet things, we return to Bare Bones, although not, in this case, the pizza company. There were, in fact, two Bare Bones at the Birmingham Coffee Festival this year, the other one being Bare Bones Chocolate, a bean-to-bar chocolate maker all the way from Glasgow. I must confess that while I really like my speciality coffee, speciality chocolate is something that I have struggled with, although I find the parallels with speciality coffee fascinating.

Bares Bones was set up at the end of last year by Lara and Cameron, the latter of whom I had the pleasure of meeting. Bean to bar, by the way, means that Bare Bones takes the raw cocoa beans and goes through all the steps of turning them into the finished product, ie chocolate, which gives Bare Bones a high degree of control over each step in the process. Bares Bones also uses no additives and no emulsifiers, just the “bare bones”.

Like speciality coffee roasters, Bare Bones sources its cocoa from single origins. In this case, the cocoa comes via a trader in Antwerp, grown in farm co-operatives in Honduras, Madagascar, Guatemala and the Dominican Republic. The similarities don’t end there: the first step is to roast the cocoa beans, something Bare Bones does in a Giesen coffee roaster (belonging to Tin Donkey)! The cocoa is roasted in its shell, which is separated after roasting, a processing known as cracking. Finally, the cocoa is ground, along with the sugar, using a stone grinder, a process which takes up to three days! Then all that’s left is for the chocolate to be aged, allowing the flavour to develop, before it’s packaged up, the package made from recycled coffee cups!

The proof, as always, is in the eating, which I approached with some trepidation, typically not finding much speciality chocolate to my taste. This is usually because it’s too bitter, but the Bare Bones chocolate was much smoother. This, Cameron told me, comes from the slow grinding process, which reduces the volatile acids in the chocolate which, in turn, reduces the bitterness.

So, there you have it, a speciality chocolate which I like. Now all I need is to find some speciality tea that’s to my tastes… Who knows, miracles might happen! Don’t forget to check out the final post from this year’s festival, which is a general round-up, covering subjects as diverse as sustainability, new kit, cups and even tea!