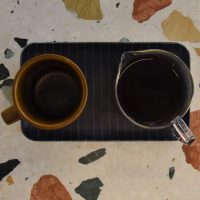 Toki, which opened in August 2015, is just a 10-minute walk northwest of Amsterdam’s Central Station. Despite being close to the centre, it felt to me more like a residential area and definitely not a tourist destination. A large, bright, open coffee shop, Toki’s made up of several smaller, interconnected rooms, the layout reminding me of Edinburgh’s Brew Lab (subject of yesterday’s Coffee Spot Update).

The coffee’s from Bonanza in Berlin, with a seasonal blend and single-origin on espresso and, typically, three single-origins on pour-over through the Kalita Wave. These change every month or so, depending on what Bonanza sends through (during my visit the choices were from Kenya, Indonesia and Ethiopia). The single-origin espresso changes more frequently, typically once a week, sometimes twice.

If coffee doesn’t take your fancy, there’s a wide range of loose-leaf teas, plus cold drinks and a fridge full of beer. Meanwhile, if you are hungry, there’s cake every day, while the kitchen, serving brunch, is open from 08:00 – 16:00, Wednesday to Friday, and from 09:00 – 16:00 at the weekends. Note that Toki is cashless, so don’t forget to bring a card!

Toki is in a shaded spot on a bright corner, where Vinkenstraat (one of four streets that run in parallel between the railway tracks and Brouwersgracht) meets Binnen Dommersstraat, a shorter cross street. Toki occupies two long, thin spaces joined by two open doorways in the party wall (which is where the similarity to Brew Lab comes in). The narrow ends of both spaces face onto Binnen Dommersstraat and, despite this being the address, the entrance shows no favouritism, being a single door right on the corner at 45° to both.

This leads you into the left-hand of the two spaces, where picture windows on both Binnen Dommersstraat (to the right of the door) and Vinkenstraat (to the left) make for a very bright, airy space. There are two-person window-bars in each, although since the counter is dead ahead along the left-hand side, the two stools there are less attractive options.

The counter itself is in two parts, occupying the left-hand side of the rear section. The first part is L-shaped, one side facing the door, where you’ll find the till. The other side has a two-group La Marzocco Linea espresso machine which faces into the shop, so you can stand at the till and watch your espresso being made.

The second part of the counter is effectively a continuation, occupying the remaining space to the back of the shop. The pour-over is made here, along with the tea, while the five bar stools provide the perfect vantage point to watch them being made. There are also a couple of stools in front of the espresso machine, but they really are the seating of last resort.

A wall running down the centre separates the two parts of Toki, with a pair of open doorways, with a square, window-like opening between them, providing access. Staying in the left-hand side for now, there’s a table with a bench before the first opening, while the window-like opening has a four-person bar on either side, which means that you can sit on opposite sides and talk.

The right-hand side is also split into front and back, although here the back is occupied by the kitchen and toilets. The kitchen, which is on the left, was closed when I was there, the counter acting as a two-person bar at the back on the left. There’s a 12-person communal table against right-hand wall with long benches and two stools at either end, followed by a large sofa that stops just short of the windows at the front, leaving room for two folding camp chairs that look out onto the street. Finally, there’s a narrow, two-person table in the space between the windows and the first opening along the party wall.

I decided to order a pour-over, but feeling lazy, I asked the barista to select the beans, being rewarded with a subtle, gentle brew which turned out to be the Kenyan, a Mwendia AA. This had more complexity than the stereotypical juicy coffee associated with Kenya, a lovely brew which more than held its own as it cooled. All in all, a very mellow, relaxing coffee for a mellow, relaxing coffee shop.