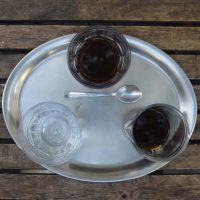 Mamacoffee is a Prague-based coffee shop/roaster chain, something of a veteran of the city’s speciality coffee scene, having started ten years ago. These days, there are six outlets in Prague, plus a mobile coffee bar. As luck would have it, the Londýnská branch in the New Town (Nové Město) was the very first Mamacoffee as well as being conveniently close to my hotel (and just around the corner from Pražírna Kavárna), so I got to make a couple of visits.

There’s not much to it, with more seating outside (from spring to autumn) on the raised decking area in front of the shop than there is in the cosy interior, where there’s just enough room for the counter and a small L-shaped arrangement of tables.

However, being small hasn’t prevented Mamacoffee from offering a full coffee service, with a wide selection of single-origins on offer. These are all directly traded and roasted in-house, with daily espresso and batch-brew options, the baristas deciding what to put on each morning. Meanwhile any of the single-origins on sale are available as a pour-over through the V60 or as an Aeropress. This is all backed up with a small range of cakes and savouries.

Mamacoffee is on the leafy Londýnská, near its junction with the busier Rumunská. On the western side of the street, which is lined with tall townhouses, Mamacoffee is in a more modern building, the modest interior overshadowed by a large outdoor seating area between it and the pavement. Access is on the left, where a broad path leads between railings to the door on the left-hand side of the building. Along the way, you pass a pair of square two-person tables, one on either side, while to your right, a raised, shaded, square decking area holds three more tables in the corners (one two-person and two four-person ones). There’s one more outside table, another two-person affair, tucked under Mamacoffee’s only window to the right of the door.

The decking area is a lovely, accessed via the back, left-hand corner, which is directly opposite the door. Surrounded on three sides by railings and flowerbeds, the fourth side (on the right) has a pair of wooden planters and a glorious, mature tree, which provides shade in the mornings (in the afternoons, the whole area is shading by the five-storey building). The only downside is that, in common with most outdoor seating in Prague, it attracts the smokers.

A shallow ramp leads down from the door to the interior, where there’s just enough room for the counter, set slightly back on the left, and five two-person tables, arranged in an L-shape on the right. Two are by the solitary window next to the door, while the other three are in a row along the right-hand wall. The wall on the left between counter and door has retail shelves, stocking bags of beans and reusable cups. The till is next to the espresso machine on the narrow part of the counter, facing the door, while the cakes are on the corner.

I visited twice, once for afternoon coffee on Saturday and again the following day for breakfast. While I was there, Mamacoffee had six single-origins: two from Nicaragua, two from Brazil, one from Colombia and a decaf from Mexico. There was also an espresso blend which was only available in retail bags.

On my first visit, I asked the barista for a recommendation and he suggested the natural Nicaraguan Los Pinos as a pour-over. This came served on a silver tray, the coffee in a handleless glass beaker, with two standard glass tumblers, one for the coffee, the other full of water. Quite subtle compared to many naturally-processed beans, my coffee was a rich, smooth brew, which went down a treat.

Returning next day, I had the chačapuri se sýrem a bylinkami, a savoury flat bread (chačapuri) with cheese (sýrem) and herbs (bylinkami) for breakfast. This was served warm and was excellent. I paired this with a flat white, made with that day’s single-origin espresso, a different Nicaraguan to the one that I’d had as a pour-over the day before. This was a washed coffee from the farm of Don Byron Corrales, and it went really well in milk, combining with the milk’s natural sweetness.

Before I left, I tried the same coffee as an espresso, which turned out to be a surprising contrast. Given how it was in milk, I’d expected something lighter, but it was quite full-bodied, which was no bad thing.