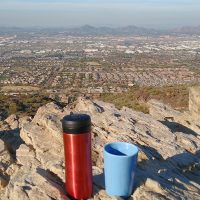 Welcome to the first (and, as it turned out, last) Travels with my Coffee of 2020, the series where I take my coffee to all the best places, particularly when there are no speciality coffee shops to be found. Last year, my coffee did very well, going on a road trip through Arizona & New Mexico, spending a month in Shanghai and another five weeks in the USA, before going on a second road trip, this time in the south of Ireland. We’ll see if this year is as eventful.

It got off to a good start as I flew to San Jose, spending a week in the Bay Area, with day trips to San Francisco and Oakland. From there, I flew to Phoenix, where I spent a week (work again) before touring northern Arizona the following week. After that, I flew across the USA from Phoenix to Portland (Maine) via Atlanta to spend a weekend with Amanda, then flew home from Boston.

As ever, I was joined by my trusty travelling coffee kit, which saved me from plenty of bad office coffee, while my Travel Press and three of my reusable cups had some adventures along the way, particularly during the week in northern Arizona.

You can see what we got up to in the gallery.

My trip began in with a week in the Bay Area, where I was staying in Foster City for work, a desert of speciality coffee. I was very grateful for my trusty travelling coffee kit, which got me off to a good start each day. I also took my Travel Press for a daily lunchtime stroll down to the lake behind the office, as well as heading out the shore of San Francisco Bay.

However, things got really interesting the following week, when I flew to Phoenix, which has a growing speciality coffee scene. I stayed in the same hotel as last year, which meant that I was able to visit Maverick Coffee for a flat white on my way to the office each morning. I also got in a wonderful hike in the Pima Canyon in South Mountain.

After that, I was off around northern Arizona, where there was more hiking to be done. I drove up to Prescott, going to long way around, through Wickenburg, then crossing the mountains on State Route 89, a glorious drive through some breath-taking mountain scenery. Although I stayed in Prescott, I didn’t spend much time in the town, using it as a base to explore, driving east through the mountains to Jerome and then down to Red Rock Country, where I had a hike around Cathedral Rock, as well as paying a return visit to Firecreek Big Park in the Village of Oak Creek.

From Prescott, I went north, all the way to the Grand Canyon, staying just south of the canyon itself in Tusayan. I spent two full days in the Grand Canyon: on my first day it was snowing at the rim, which was shrouded in cloud, while on the second day, the clouds had gone and I enjoyed some magnificent views!

I’d previously hiked down into the Grand Canyon on my first visit there in 2016, taking the Bright Angel Trail as far as Indian Garden. This time I took the South Kaibab trail, hiking it on both days, really enjoying the contrast between the first day, where rock faces unexpectedly loomed out of the clouds at you, and the second day, where I could see for miles, the whole canyon laid out below me!

I got as far as Skeleton Point on both occasions (I actually went a little bit further on the first day because I wasn’t stopping as often to take pictures!), a round trip of just under 10 km, with a descent of 620m. Both hikes took me around five hours and, had I had more daylight (or been able to get up earlier!) I probably could have reached a spot known as The Tipoff, which is my limit for a day hike.

From the Grand Canyon, I drove down to Flagstaff, where I revisited Firecreek and Matador before making my way back to Phoenix for my flight to Portland and, from there, my flight home.

If you’ve enjoyed this, check out where else I’ve taken my coffee in my Travels with my Coffee series.