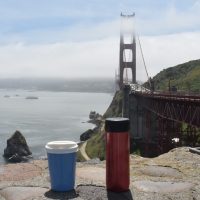 Welcome to another in my new series, Travels with my Coffee, where I take my coffee to all the best places, particularly when there are no speciality coffee shops to be found. This is the third Travels with my Coffee of 2019, which got off to a good start with my road trip through Arizona & New Mexico in January, followed by a trip to Shanghai in March.

Today it’s the turn of the five-week trip I took to the USA in April, which turned out to be a bit of an epic journey, starting in New Orleans and ending at the opposite end of the country in Chicago. In between, however, I flew to Los Angeles, took the train to San Jose, spent two weeks in the Bay Area, then took the train all the way to Chicago!

As ever, I was joined by my trusty Travel Press, Aergrind and Therma Cup. I also brought, for the first time ever, my rCup, a new reusable cup made from recycled paper coffee cups, which I’d picked up at the London Coffee Festival shortly before leaving on the trip, which doubled as a test-drive for the rCup.

You can see what I got up to in the gallery.

My trip began with a week spent working in New Orleans, a city blessed with excellent coffee shops, several within walking distance of the office, so I was able to pop out each day for some great coffee. However, to fill in the gaps, I made a Travel Press each morning to take into work with me.

From there, I flew over to Los Angeles, where I spent a whirlwind two nights and a day checking out the downtown coffee scene, before catching the train, the Coast Starlight, to San Jose. The train carries on all the way to Seattle, the whole trip taking a day and a half, while my segment, along the coast to San Luis Obispo, then heading inland to follow the Salinas Valley and on to San Jose, took 11 hours. This gave me plenty of time to pop down to the café car and make myself some coffee.

I then spent a fortnight in the Bay Area, one week working in Foster City and the following week being a tourist, including trips to San Francisco and a day hiking in Muir Woods. From there, it was back on the train, the California Zephyr, departing from Emeryville in Oakland, just across the bay from San Francisco, and arriving 2½ days later in Chicago after traversing the Sierra Nevada, Rockies and the Missouri and Mississippi Rivers. No disrespect to Amtrak’s coffee, which was plentiful and free, but I would have been lost without my Travel Press and Aergrind, plus a steady supply of hot water from the lovely steward in the café car.

The final leg of my trip was a working spent working in downtown Chicago. Chicago afforded plenty of great coffee options nearby, including one, Infuse Coffee & Tea Bar, in the lobby of the office building where I went at least twice every day. However, I still found time to take my coffee for walks along river to admire the amazing architecture. Then, finally, it was time to fly home.

I mentioned at the start that I’d brought along my new rCup, the first reusable cup I know of that’s made of recycled paper coffee cups. Other than its environmental credentials, its main draw for me is the lid, which is fully closable and, when open, offers 360° drinking (that is, there’s no specific hole in the lid, so you can drink whatever the orientation of the cup).

Since I rarely use the lids on my reusable cups, the 360° feature wasn’t of that much interest to me. However, the fact that the lid closes fully (like the Frank Green Smart Cup cup) came in handy, since I could snap it shut, confident of not spilling anything when on the go. This proved very useful on a moving train when collecting hot water from the café car, particularly when I was to my compartment carrying a cup full of hot water! I can see it being handy when flying too!

It also came to my rescue when I forgot there was some coffee left in my cup. Slinging it in my rucksack (having first closed the lid) I was very relieved to see that nothing had leaked out when I retrieved the cup a few hours later.

The only downside is one of personal preference: I found it a little too plastic in texture (similar to my Ecoffee and Eco To Go cups). Although not unpleasant to drink from, it’s not in the same league as my current favourites, the Therma Cup and HuskeeCup. However, if you’re looking for something with great environmental credentials and with a 100% leak-proof lid, then the rCup’s a clear winner!

If you’ve enjoyed this instalment, check out where else I’ve taken my coffee in my Travels with my Coffee series.