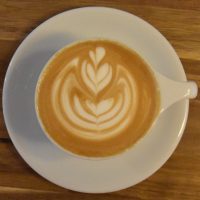 This time last year I was in Amsterdam for the World of Coffee, after which I spent two and a half days exploring the city’s excellent coffee scene. The subject of today’s Coffee Spot, Scandinavian Embassy, was on several people’s lists, and, in keeping with the principle of leaving the best until last, I popped in for breakfast on my final day. South of the centre, in the De Pijp neighbourhood, it’s at the western end of the Sarphatipark, slightly off the beaten tourist track, but well worth a visit.

As the name suggests, Scandinavian Embassy has championed Scandinavian roasters since it opened in 2014. During my visit, there was a blend from Coffee Collective on espresso, plus single-origins from Drop Coffee Roasters, Koppi and Kafferäven Per Nordby on pour-over through the V60. My choices included two washed coffees, a Colombian and a Kenyan, both from Koppi, plus two naturals, an heirloom varietal from Ethiopia (Per Nordby) and a Geisha varietal from Bolivia (Drop), with the options changing every week or two. All of this is coupled with a limited all-day breakfast and lunch menu, plus a copious supply of cakes, featuring freshly baked cinnamon buns to round off the Scandinavian theme.

Inside it’s long and thin, with a low ceiling, making it about twice as wide as it is tall. The counter is set back on the left, while there’s limited seating at the front, just a three-person window-bar, while along the right-hand wall are a pair of tiny shelf tables, each with a pair of chairs. The only other seating at the front is an L-shaped bench assembly against the left-hand wall. This occupies the space under the retail shelves (which are next to the door) and the front of the counter.

Talking of which, the counter, like Scandinavian Embassy, is long and thin, with the espresso machine at the front, and a row of chairs along an extended bar down the right-hand side, ideal for barista-watching or, further down, watching the staff preparing food in the open kitchen.

Beyond the counter, two steps lead down to a more spacious rear seating area. There’s a one-person wooden table projecting from the right-hand wall at the bottom of the step, followed by an old, disused fireplace, beyond which is a large, low, broad bench seat. Meanwhile, an eight-person communal table in line with the counter occupies the majority of the space.

Finally, right at the back, there’s a small conservatory-like extension, with glass walls/roof. A conventional bench runs along the right-hand wall, while at the back on the left is a round, five-person table, with an L-shaped bench in the right-hand corner. French doors open in the middle of the back wall, but sadly the small garden is off-limits.

I began with a lovely, rich flat white, coffee and milk working well together, with hints of something coming through from the coffee. I paired this with the mushroom sourdough pancakes for breakfast. The pancake was crepe-like, thin and crispy, which was not what I was expecting, but very tasty nonetheless.

I followed this up with the natural Ethiopian pour-over, which turned out to be a very fruity and sweet coffee. While I was there, I chatted with Daniella, my barista and owner of Scandinavian Embassy. Some of the pour-overs were served in lovely, bowl-like cups which Daniella had made herself for the 2017 Brewer’s Cup. It was her first year competing and she ended up as the Dutch national champion and finished 13th in the world!

Part of the reason I was lingering was that there was a new batch of cinnamon buns due and I wanted to have one fresh out of the oven. Along the way I had a bonus flat white (made in error for another customer, so offered to me rather than throwing it away). When the cinnamon buns came out of the oven it was obvious that I’d made the correct decision in waiting. My bun was simply gorgeous: rich, chewy dough with a subtle cinnamon flavour and crystals of cinnamon sugar on top. The perfect end to my morning visit.