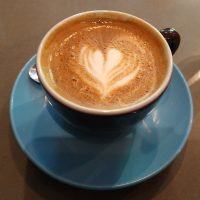 My first trip to Dublin, back in 2014, saw me visit Brother Hubbard, a comparatively small spot with a reputation for excellent food as well as really good coffee, located just to the north of the River Liffey. Now, six years on, it’s expanded out of all recognition, maybe quadrupling in size, adding, amongst other things, a restaurant and an on-site roastery, Farmhand. Along the way, it rebranded itself Brother Hubbard North to distinguish itself from the subject of today’s Coffee Spot, Brother Hubbard South, which, appropriately enough, is (some way) south of the Liffey.

Brother Hubbard South is spread over two rooms, with a large, covered outside seating terrace. The first room contains the counter, which is only of interest if you are ordering takeaway, while the second room has more seating. Brother Hubbard South follows in the footsteps of the original Brother Hubbard, combining excellent food and really good coffee, which it serves from a breakfast menu (until 11am), an all-day brunch menu and a lunch menu (from 12pm). There’s also an expanded weekend brunch menu, while the Farmhand house-blend is on espresso, with a single-origin on batch brew, joined by a range of other drinks, including prosecco.

The large, screened-off terrace is in front of the right-hand side of Brother Hubbard South, the seating sheltering under two massive umbrellas which help keep the heat in during the winter and the sun out during the summer. And I imagine they keep the rain off too. The space to the left is open, where the large windows at the front of Brother Hubbard draw you towards a pair of doors. One of these, the bright red one to the right, leads to the upper floors, while the left-hand one, which looks as if it should lead into Brother Hubbard, is a decoy which isn’t in use.

Instead, you enter via an opening along the left-hand side of the seating terrace. If you are planning on staying out here, just wait by the entrance and someone will be along to seat you at one of the four rows of two-person tables, each row containing four tables. Alternatively, turn left and heading inside, where you’ll find yourself in the first of the two rooms, which is the domain of the counter. This dominates, occupying most of the right-hand side, save for a small gap at the front, where there’s a bench (handy if you are waiting for a coffee to go), and a long space down the left-hand side, which leads, via an open doorway in the back wall, to the second of the two rooms.

Since Brother Hubbard offers table service, there’s no reason to linger by the counter, other than to check out the impressive range of cakes. Instead, you’ll be taken into the other room, where the seating is arranged along the walls, with six two-person tables along the opposite wall, two along the back and three more along the party wall. These surround a group of five two-person tables which have been pushed together to form a 12-person communal table. At the front, an eight-person window-bar starts at the unused door and runs along the three tall windows which stretch the width of Brother Hubbard.

Take a seat and a menu (which is seasonal and different from the menu at Brother Hubbard North) will be brought to your table. I was there for my breakfast one Saturday morning in October, selecting the Brother Hubbard eggs and avocado with extra toast. Consisting of two slices of toast, topped with smashed avocado and chickpeas, with two poached eggs on top, it was more of a feast than a breakfast. I loved it, finding it an interesting mix of textures and flavours. I paired this an excellent, fruity flat white, made with the Farmhand coffee house-blend, which held up really well against the milk.

December 2020: Brother Hubbard South was a runner-up for the 2020 Best Breakfast Award.