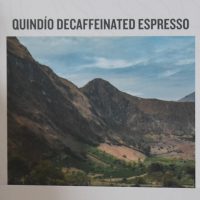 I can’t believe it’s been five years since the original Decaf Challenge, my attempt to raise the profile of all the great decaf coffee out there, inviting roasters to send me their decaf roasts, which I then highlighted in the post. I also tried to dispel some of the persistent, negative myths surrounding decaf coffee.

Although I’m still a champion of decaf coffee, drinking it on a regular basis (about 25% of my coffee consumption is decaf) I haven’t repeated the exercise, largely because, with so much great decaf about, it’s unfair to highlight just a few roasters. These days, almost every good roaster I know has a decent decaf, while there are more options than ever when it comes to sourcing decaffeinated green beans. I honestly can’t remember the last time I bought a bag of poor decaf.

However, despite this progress, options are limited. While most roasters have multiple espresso and pour-over options, there’s usually only a single decaf on offer, invariably roasted for espresso. So, when I heard that Workshop Coffee had launched a pair of decafs, both using the same beans, but with one roasted for espresso, the other for filter, I had to buy some.

While there’s a lot more great decaf available these days, it’s still true that decaf drinkers are poorly served compared to their caffeine-drinking counterparts. Most coffee shops, if they offer decaf at all, only have a single option. The reason given is, of course, lack of demand and, in that respect, I am guilty. While I do drink decaf when I’m out and about, it’s the exception rather than the rule: the majority of the decaf that I drink is at home.

So, it’s unsurprising that roasters follow the same trend. Although the onset of the COVID-19 pandemic has led to an upswing in direct sales, most roasters I know sell the majority of their coffee to wholesale accounts and, in the UK, that largely means for coffee roasted for espresso. Unsurprisingly, this means that decaf is also predominantly roasted for espresso, since that’s what coffee shops want. I note, in passing, that in the USA, where filter coffee consumption seems to be much higher, coffee shops often have a decaf filter option, with some roasters offering decaf beans roasted specifically for filter.

However, in the UK, this is rare, which, of course, creates something of a paradox for me. At home, I drink my decaf exclusively in the evening, when I’m rarely in the mood for espresso, preferring something longer, ie, filter. Hence, I’m preparing a bean roasted for espresso through a filter method, almost invariably using my AeroPress, although occasionally I will switch to my cafetiere, or, more recently, my Clever Dripper, depending on the bean.

Naturally, when Workshop Coffee announced it had a decaf roasted for filter, I was immediately interested. That I could buy the same decaf beans, but also roasted for espresso, just made it all the more intriguing, so I bought a couple of bags and set to trying them.

The beans come from Quindío in Colombia, the combined output from smallholders in four of the region’s 12 municipalities. The coffee is decaffeinated in Colombia using the Sugar Cane EA process, which you can read about on Workshop’s website, where you can also find out more about the coffee and the smallholder farmers.

The first thing to say is that I really enjoyed both espresso and filter roasts. Comparing them side-by-side, the filter is obviously a lighter roast, as you can see in the gallery. To begin with, I just made them as usual, trying the espresso roast through my AeroPress and the filter both as a pour-over and through my Clever Dripper. Then I decided to compare them side-by-side.

The tasting notes provided by Workshop are quite different for the two roasts. Suffice to say, my notoriously undiscerning palate didn’t pick out any of the flavours described for either of them! However, I did detect some differences. Not that I was blind tasting, nor was my approach very scientific, although for each preparation method, I did use the same recipe for both roasts.

I began by making an AeroPress of each, drinking them side-by-side. They were clearly the same beans, with similar flavour profiles, but I definitely preferred the espresso roast. It was hard to put my finger on the differences, but the filter roast lacked some body compared to the espresso roast and the flavours were a bit flatter.

Had I not known that they were different roasts, I’d have probably thought that I’d just made the filter roast badly. You know how it is sometimes: you have a great coffee, make it exactly the same way, but on that one occasion, it doesn’t hit quite the same heights as before. It was that sort of level of difference.

Next, I prepared the two roasts as pour-overs, where I found that the differences were even less noticeable. My biggest problem in comparing the two was temperature: since I only had one pour-over filter, I had to make them one after the other and, since it takes around five minutes for each to make, the first one had cooled quite significantly by the time I’d finished the second.

So, for a while, all I was noticing was the difference in temperature (when it comes to taste, I am far more sensitive to temperature than anything else!). However, once they had both cooled, I found that the filter roast was a little mellower and more rounded as a pour-over, although it’s fair to say that I really enjoyed both of them.

I did one more test, comparing the same roast through the two different preparation methods, starting with the espresso roast, which I made through the AeroPress and as a pour-over. Given that different preparation methods change the way a coffee tastes, I was expecting there to be some difference, but honestly I couldn’t really pick anything up, suggesting that the espresso roast is a pretty good all round roast.

I carried out a similar experiment with the filter roast. Once again, I found it hard to tell the difference between the AeroPress and pour-over, although I marginally preferred the pour-over, with the AeroPress tasting a little flatter in comparison.

In summary, while I appreciate that Workshop is producing both filter and espresso roasts, I found that couldn’t really tell that much difference between them. If you have a more discerning palate than me, you may find more of a difference. Pleasingly, however, the espresso roast did perform better in my AeroPress, while the filter roast was better as a pour-over, which is what I expected. Regardless, I’d happily buy either as my regular evening espresso.