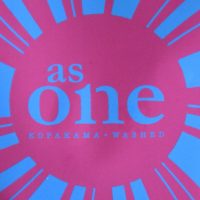 Regular readers will know that I rarely write specifically about coffee, preferring to feature places where I drink coffee, while every now then coffee roasters appear in their own Meet the Roaster series. However, very occasionally a special coffee comes along which will grab my attention. This last happened at the start of the year, when I wrote about Chimney Fire Coffee’s direct trade El Salvador, a coffee which was processed three separate ways.

Today’s Saturday Supplement is inspired by a similar coffee, this time Taylors of Harrogate’s As One from Rwanda, which is available either naturally-processed or as a washed coffee (see my Coffee Series for more details about processing). I say Taylors of Harrogate, but it’s actually from Taylors Discovery, an independent micro-roastery operating within Taylors.

The coffee is from a women’s farming group known as Ejo Heza, which means Beautiful Tomorrow in Kinyarwandan. This is part of the Kopakama cooperative in the Lake Kivu region of Rwanda, which Taylors has been partnering with since 2016. This particular microlot was hand-selected from Ejo Heza’s demonstration plot, some of it undergoing the traditional washed processing method, with the remainder being naturally-processed, a first for the cooperative.

You can read more about Taylors Discovery and the As One coffee after the gallery.

The fact that this coffee is from Taylors of Harrogate raised some eyebrows when I mentioned it on twitter. Taylors, a third-generation family-run firm from (unsurprisingly) Harrogate, is best known for its range of supermarket coffee, as well as ownership of brands such as Yorkshire Tea and Bettys. However, Taylors is also a pioneer of direct trade, speciality coffee, something which it’s been quietly getting on with for many years.

I’ve known about Taylors speciality heritage for a little while now, having enjoyed its outstanding Red Geisha from La Negrita in Colombia, which was the standout coffee at the 2019 London Coffee Festival. I also picked up a bag of a coffee called Beautiful Tomorrow, a micro-lot from none other than the Kopakama collective. Although I remember enjoying it, I was so blown away by the Geisha that I really didn’t pay it enough attention.

Since then, Taylors has established its own micro-roastery, under the brand Taylors Discovery, in order to better promote outstanding coffees like these, which are roasted on a dedicated 6 kg Giesen roaster. You can read more about Taylors Discovery on its website, but for now, I just want to talk about the As One, which was an unsolicited gift from Taylors Discovery that arrived in the post earlier this week.

The As One comes from a single microlot, grown on a demonstration plot (which Taylors helped to fund) by the Ejo Heza women’s farming group. Again, you can find a lot more information about Ejo Heza, the Kopakama cooperative and the work Taylors has been doing over on the Taylors Discovery website. You can also read about a trip that my friend and fellow blogger Giulia took to Rwanda with Taylors in 2019.

One of the things that makes the As One coffees so special is the processing. Originally, Rwanda’s coffee growers were only allowed to export washed coffees, but those restrictions were lifted in 2017. The As One coffee represents an experiment by the Ejo Heza group, resulting in the Kopakama cooperative’s first naturally-processed coffee.

First, the group’s members hand-picked the ripest cherries before removing any defects at the Mushubati washing station (one of three owned by the cooperative). Some of the cherries were then processed via the traditional washed method, where water is used to remove the fruit of the coffee cherry. The remainder were left in direct sunlight on raised drying beds for 15 days before the fruit was removed, a method known as natural processing (the Taylors Discovery website has more information about both the washed and natural processes). After processing, the two batches were kept separate for hulling/sorting at the Kopakama cooperative’s dry mill, then shipped to Taylors for roasting.

But what of the coffee itself? Unlike the Chimney Fire Coffee’s direct trade El Salvador, which I cupped since the coffee was processed three separate ways, here I only had two to compare. Instead, I made a pair of V60 pour-overs to compare side-by-side. I used to the same recipe for both (15 grams of coffee, 250 grams of water) and both took just under four minutes to complete, which suggests I ground the coffee slightly too finely.

Both coffees smelled gorgeous when ground and they tasted pretty good too. My notoriously undiscerning palate didn’t get the tasting notes from the packets (red berry, lime, caramel for the washed; papaya, strawberry, green apple for the natural) but I did get plenty of fruity flavours from both of them. The washed coffee was, as you might expect, cleaner, with more tea-like notes, while the natural was fruiter and bolder, with a little more body.

As I said, both were gorgeous, but given my predisposition towards naturals, it should come as no surprise that I (slightly) preferred the natural. On this basis, I’d say that the Kopakama cooperative should definitely continue its experiments with natural processing!

December 2021: Taylors Discovery: As One Washed & Natural was a runner-up for the 2021 Best Saturday Supplement Award.

2 thoughts on “Taylors Discovery: As One Washed & Natural”