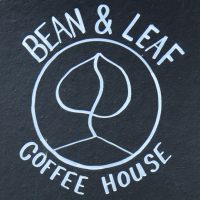 When contemplating my recent trip to Coventry, the one place that everyone recommended was Bean & Leaf, located in the heart of the city’s pedestrianised shopping centre on Hertford Street. A fairly small spot in an interestingly-shaped space with high ceilings and a quiet, cosy basement (which more than doubles the available seating), Bean & Leaf has plenty of charm. You can also sit outside, where there are a couple of tables and a pair of benches.

Since it opened in 2017, Bean & Leaf has established quite a reputation, serving some excellent coffee from roasters from around the country. There’s a house espresso (currently from Manchester newcomer, Blossom Coffee Roasters) and a guest roaster (currently Bath’s Colonna Coffee), which changes every month, supplying a second option on espresso/batch brew and a single-origin on pour-over.

Although it sees itself as primarily a coffee shop, Bean & Leaf (as the name might suggest) takes its tea just as seriously, with a wide range of loose-leaf tea from Bath’s Teahouse Emporium, served in pots with coloured egg-timers so that you know when your particular brew is done. All of this is backed up by a range of sandwiches and tempting cakes.

Bean & Leaf is tucked away in the north-eastern corner of Coventry’s pedestrianised Hertford Street (itself more of a triangular open space than a street). Approaching from the south, look for the classic columns of the Natwest building in the far, right-hand corner. Alternatively, from the north, a useful sign on Broadgate points down the left-hand passage into Hertford Street, Bean & Leaf immediately to your left as you enter the square (triangle).

Bean & Leaf occupies a small ground floor unit to the left of the soaring, central arch of the magnificent Natwest Building, a pre-war Coventry survivor that was built in 1930. Bean & Leaf is bounded by a pair of pillars, but is set back from the street/square/triangle, forming a sheltered passageway.

There are two outside tables, one in front of each pillar, while you’ll find a short bench against the back of the right-hand pillar. This faces the front of Bean & Leaf, the majority of which is occupied by a single picture window on the right. To the left of that is the door, at about 45° to the window (which itself is almost, but not quite perpendicular to Bean & Leaf’s right-hand wall). Finally, there’s another narrow window to the left of the door which is almost (but not quite) parallel to the left-hand wall and which ends against the back of the left-hand pillar.

This forms a shallow, rounded passage in front of Bean & Leaf, which provides considerable shelter both for the bench and a low, round table with a pair of stools that stands opposite it in front of the window. It also creates an interesting interior, starting to the left of the door, where the sloping window forms a little nook behind you as you enter. This is probably the best seat in the house, occupied by a broad, padded bench seat with lots of cushions, plus a small round table. Beyond this, a pair of square tables, each with two stools, occupy the left-hand wall. To the right is a cramped four-person window-bar, with a conventional two-person table behind that, which is pretty much it for the upstairs seating. The counter is in a deep recess at the back on the left, while on the right, behind the table, stairs lead along the back wall to the basement, doubling back on themselves as they go.

Although smaller than upstairs, the basement has more seating. Two four-person square tables occupy the space on the left, while on the right, three smaller, two-person tables line a wooden bench against the wall. Finally, in a small nook in the front wall, opposite the stairs, a pair of armchairs, each at 45° to the wall, share a coffee table. If anything, the basement feels more spacious and relaxed than upstairs.

I’d decided to have a pour-over, but then saw the option of a guest espresso flight and immediately changed my mind. The current guest espresso is a washed coffee from the Women’s Peace Sopacdi in the Democratic Republic of Congo, roasted by Colonna Coffee. The flight comes as an espresso, macchiato and batch brew, plus a bottle of still/sparkling water.

I started with the filter, a lovely, smooth brew. Traditionally, you’re supposed to have the macchiato next, but I went for the espresso, which was much sharper, with a real acidic kick to it. The contrast between filter and espresso (considering it’s the same coffee) is quite stark. The contrast continued with the macchiato, the milk really taming the espresso, although the same underlying flavours are there. Returning to the last of filter, I could detect the same underlying flavours, only much more diluted.

The last few sips of each brought out some more fruity notes, with the macchiato impressively holding its latte art to the bottom of the glass. Of the three, it was my favourite, the espresso still retaining its punch, but softened by the milk, which added a sweetness that complemented the coffee’s underlying flavours.

Before I left, the staff made me a shot of the Blossom Espresso (the house espresso). A much more rounded shot compared to the guest, it had a deep, rich flavour, with classic caramel/chocolate notes.

December 2021: Bean & Leaf Coffee House was a runner-up for the 2021 Coffee Spot with the Best Basement Award.