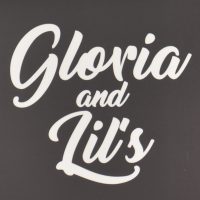 Gloria and Lil’s is a (relatively) recent addition to Coventry’s speciality coffee scene, opening in November 2019, which has meant that, for most of the time, it’s been under COVID-19 restrictions. However, this hasn’t stopped it from carving out a loyal, local customer base. Occupying a spacious, modern unit located just south of the ring road and close to the university, there’s a limited amount of indoor seating (thanks to the COVID-19 social distancing requirements) with plenty more tables outside on the quiet street.

Gloria and Lil’s was recommended to me by my local source, Jenny Watts, who praised the food in particular. Since it was a mere two minutes’ walk from my hotel, it became a no-brainer when I was looking for breakfast on my recent visit. Talking of which, there’s a unique, bagel/flatbread-based brunch menu, with everything made to order. This includes the flatbreads which are literally baked as the rest of the meal is being prepared. The bagels are also baked fresh every morning, as are the cakes. The coffee, meanwhile, is from St. Martin’s Coffee Roasters in nearby Leicester, with the Intrepid blend and decaf on espresso and a single-origin on batch brew.

Gloria and Lil’s is on the north side of Parkside, a dead-end road which (at least on the Saturday I was there) doesn’t get much traffic. The extensive outside seating occupies the pavement in front of the café, spreading well beyond it on the left-hand side, enabling Gloria and Lil’s to add an additional three well-spaced tables (a pair of two-person ones flanking a four-person one).

Meanwhile, in front of Gloria and Lil’s, a pair of small, two-person tables with stools stand at the edge of the pavement, each with another four-person table behind it. These larger tables are against the tall, floor-to-ceiling windows which flank the central glass floor of Gloria and Lil’s. The windows are slightly recessed under the projecting brickwork of the upper floors, forming a pair of little bays which offer the tables limited shelter from the elements.

The interior benefits from the windows, which are joined by more floor-to-ceiling windows running across the back wall. These combine with high, open ceilings to make for a very bright, airy space. The front half is given over to seating, while the back half, which is a little bit narrower, is occupied by the counter, behind which is a large, open kitchen where all the food is prepared. Usually, kitchens like this can be fairly dark affairs, but this one, with its back wall of windows, is as bright and airy as the rest of Gloria and Lil’s.

The interior seating is currently limited by COVID-19 restrictions. A single, tall, four-person table occupies the windows on the left, while the corresponding space on the right is taken by a sofa and armchair, facing each other across a low coffee table. A long, wooden bench-seat with cushions runs along the right-hand wall, seating provided by one two-person and one four-person table. Finally, there’s another four-person table midway between the windows and the counter.

The counter is an interesting, L-shaped affair, which effectively forms a bay on the left-hand side, where you order, the cakes strategically placed in front of you, menu above them on a big blackboard. The espresso machine is equally strategically placed to your right, so you can watch your coffee being made while you wrestle with the dilemma of which awesome-looking cake to have or while you ponder your flatbread toppings. The espresso machine, visible from most parts of the café, puts the coffee-making front and centre, which I appreciate.

Gloria & Lil’s is owned, not by Gloria and Lil, but by Eilis and Emma, who do all the cooking, Eilis doing savoury (flatbreads, bagels), leaving Emma to do the sweet things (cakes, etc). Gloria and Lil were their food trucks: when they decided to swap four wheels for four walls (as they put it), Eilis and Emma named the café in their honour.

Gloria & Lil’s has a unique bagel/flatbread-based breakfast. There are plenty of pre-determined toppings, or you can go freestyle and build your own. Whatever you choose, be prepared for lots of questions, starting (if you went for a flatbread) if you want it wrapped or flat. For me, the decision depends on the filling/topping. A fried egg and salad suits flat (like a pizza), eaten with a knife and fork, while masses of halloumi, avocado and tomato (which is what I had) lends itself more to a wrap. The flatbread, by the way, is very light and fluffy, more like a naan in texture than a chapati to use an Indian food analogy.

Although tempted by the single-origin batch brew, which changes every two weeks or so, I went for a flat white to start my day, made with the Intrepid blend from St. Martin’s, the coffee combining with the milk for a smooth, classic flat white.