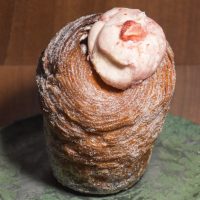 Medicine was a chance discovery that I made in July when I stumbled on its New Street bakery/café in the heart of Birmingham. In contrast, the original Medicine Kitchen and Bakery is tucked away in Codsall, a small village west of Wolverhampton. A more modest affair than the massive New Street site, it sits in a small parade of shops on Station Road, a five-minute walk from the railway station. If you don’t mind narrow country lanes, it’s also a useful alternative to the motorway services if you are travelling along the M54, a typical diversion adding about 25 minutes to your journey.

The basic offering is the same as New Street, with a bewildering array of cakes, pastries and savouries, all freshly baked on-site, to tempt you. The full breakfast, brunch and lunch menus mix old favourites with more innovative dishes, along with plenty of vegetarian and vegan options, while the coffee, served from an espresso-based menu, is from nearby Iron & Fire. Naturally, a wide range of freshly-baked loaves are available. You can either sit at one of three outside tables or inside, where tables and booths line the windows at the front, extending down the left-hand side.

This is the original Medicine, which started as a bakery and grew into a thriving café and deli. On Station Road, it’s in the heart of the village, with plenty of free parking nearby. Approaching from the station, it’s on the left, in the middle of a small parade of shops, set back from the main street on a small access road. The white façade strikes a contrast with the brick buildings on either side, although the front is dominated by two large windows, the double doors recessed on the right. Three four-person tables sit outside on the broad pavement, the middle one with chairs, while the ones at either end have box-shaped benches, all painted white to match the façade.

Inside, Medicine goes a long way back, although much of that houses the bakery and kitchen, which are behind the counter on the right. This is set back from the doors, running the length of the right-hand wall, with an extension to the left (running across the front of then kitchen) to cater for the bread. There’s also a row of tables on the left parallel to the counter which display the savoury options, as well as separating the counter from the seating.

Since Medicine offers table service, you’ll only visit the counter to pay or if you’re ordering takeaway, although it never hurts to wander up to admire the many, many cakes which are displayed along its full length. The seating, meanwhile, is at the front and all the way down the left-hand side, extending past the counter and alongside the kitchen. Three four-person booths are back-to-back in the windows at the front, with a pair of two-person tables behind them. A sofa-bench runs along the left-hand wall with another two-person table followed by a four-person one, then come six four-person booths, again back-to-back, stretching off down the remainder of the left-hand side.

I first visited Codsall in August, before returning a month later with Amanda, on both occasions driving from North Wales to Guildford and timing things to break the journey over lunch. This was also to rectify the mistake I made of arriving too late for lunch when I discovered Medicine on New Street, which left me feeling as though I’d missed out.

Spoilt for choice, I played it safe on my first visit with poached eggs on sourdough toast. Offered a choice of smoked salmon, bacon or seasonal greens, I went with the latter, my lunch arriving exactly as advertised, two poached eggs on two generous slices of sourdough toast with a helping of seasonal greens. For once, my maxim of always ordering extra toast wasn’t required.

On my return, both Amanda and I ordered the Vegan Medicine from the brunch menu, which we promptly turned vegetarian by adding halloumi, while I ordered a poached egg to round things off. We both enjoyed our brunches, Amanda particularly liking the pumpkin falafel, while I liked everything in equal measure!

I had a flat white on my first visit and an espresso on my return, while Amanda went for a flat white, all made with Iron & Fire’s Colombian Jazz. This went perfectly with the milk to produce a rich, smooth flat white. As an espresso, it was a real classic, with rich chocolate notes and a pleasing touch of acidity. Amanda enjoyed it so much that she wanted to buy some to take back to America, but there were only 1 kg bags left.

December 2021: Medicine Codsall was a runner-up for the 2021 Best Cake Award.