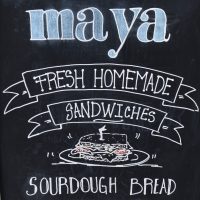 I’ve been meaning to check out Weybridge’s speciality coffee scene for a while, so when I found myself in the vicinity with time on my hands on Saturday, I did just that. I did have a list of potentials, but ended up visiting Maya, which was a chance discovery. A self-styled artisan micro-bakery and coffee house, I spotted Maya as I wandered down the appropriately-named Baker Street.

Opened in March 2019 by Oniz and Serdar, everything is prepared on site in the kitchen/bakery at the back, including the sourdough loaves that form the basis of the breakfast (available until 11:30) and sandwich (lunch) menus. There are also plenty of cakes, while the coffee comes from Square Mile, Maya offering a standard espresso-based menu using the Red Brick blend, with milk-based drinks served in HuskeeCups.

You can sit outside in the sun at the solitary table, or inside, where there’s a sunny window-bar on the left, plus tables down the right-hand side, opposite the counter. The kitchen and bakery, meanwhile, are tucked away at the back.

Maya is right in the heart of Weybridge, on the north side of Baker Street, meaning it gets plenty of sun. At the end of a terrace of brick-built shops with accommodation above, the front is almost all glass, including a large window down the left-hand side, where a short passage ends in a gate, presumably to the private gardens behind the terrace.

The central door is deeply recessed between two large picture windows, the one on the right sloping forwards at about 45° before ending in a short section parallel with the street. The window on the left is more conventional, but not as deep, leaving just enough space for a two-person table between the window and the pavement, Maya’s only outside seating.

Inside, Maya goes a long way back, with the counter, set back on the left, dominating the space. Roughly square, the cakes are displayed along the right-hand side, while the espresso machine and its grinders (for Square Mile’s Red Brick blend and seasonal decaf) are against the wall on the left, the menu written on a mirror above them. The bread is displayed on the back wall, while you order at the front of the counter, which is opposite the door, before taking a seat.

The choice of seating is fairly simple. Behind you and to your left is an L-shaped window-bar, with a pair of stools down the left-hand side, although I’m sure that in pre-COVID days, there would have been at least one more stool (in the window at the front). Alternatively, you can take one of the tables on the right.

A four-person table occupies the window at the front, which is behind you as you enter, while a row of three two-/three-person tables runs along the wall, extending down opposite the counter. The first and second are separated by a large pot-plant, while the third is beyond some retail shelves. At the back, bookshelves denote the end of the coffee shop, with the kitchen visible beyond.

I arrived just before noon on a Saturday, by which time the sourdough loaves and all the pastries had already been sold. I wasn’t the only one who was disappointed, judging by the constant stream of customers who came in asking for bread. Fortunately, the kitchen still had sufficient bread for the sandwiches, so I ordered the halloumi and paprika one for my lunch.

Although you choose from a pre-set menu, all the sandwiches are made to order in the kitchen, so there can be a little bit of a wait, particularly if Maya’s is busy. My sandwich duly arrived, the two halves mounted on top of each other and skewered with a wooden stake to keep them together. The halloumi was lovely, but the highlight was the soft, springy sourdough bread, which isn’t always the case with sourdough.

I paired that with a shot of Square Mile’s seasonal Red Brick blend as an espresso, served in a classic white cup. While Red Brick holds no great surprises for me, I’ve not had it as an espresso for a while and had forgotten its pleasing acidity, which I really enjoyed.