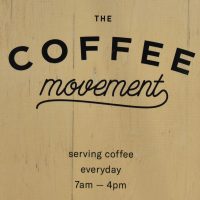 This time last week I was in San Francisco, where the highlight of my day, coffee-wise at least, was The Coffee Movement, a recommendation from a barista at Saint Frank Coffee in Menlo Park. The Coffee Movement is in Chinatown, on Washington Street, roughly halfway up the hill. It opened in September 2019, so has spent most of its life operating during the COVID-19 pandemic, whose effects are still being felt. This includes no indoor seating and a queuing system to limit the number of customers in the shop. Instead, seating is provided outside, either at a bench in front of the window or standing at the back of a converted VW van.

However, the real draw is the coffee. The Coffee Movement is another multi-roaster, with the coffee changing every week, drawn from around the USA and beyond. There are three choices at any one time, available through an extremely concise espresso-based menu, along with filter (hot or cold). There’s a range of signature and seasonal drinks, although best of all is the tasting flight, where you can try all three coffees (filter) or one coffee as espresso, piccolo and filter. There’s also a small selection of pastries if you’re hungry.

The Coffee Movement is a block from the San Francisco Cable Car Museum, with views up the hill towards Leavenworth Street at the top and down past the iconic Transamerica Pyramid to the bay, the Oakland Bay Bridge providing the backdrop. Heading downhill, The Coffee Traveller is on the left, more notable for its yellow converted VW camper van than the shop itself, where a central, recessed door is flanked by two broad bay windows. A single bench stands in front of the window to the right, while to the left, there’s a queueing system which runs left-to-right. When you reach the front, wait by the door until one of the staff calls you in.

Inside the layout is simple, an L-shaped counter occupying the back, right-hand corner. Narrow bars occupy the windows at the front, which, in pre-COVID times, provided the inside seating, but which are currently off-limits. Finally, a large retail selection graces the left-hand side. You order at the front of the counter, with its two gleaming Modbar group heads, the menu on the wall to your right. You’ll also find the current choice of coffees here. Once you’ve ordered, head around the left-hand side of the counter to pay, where you’ll also find the day’s selection of pastries waiting to tempt you.

If you’re staying, you’re welcome to either sit outside on the bench, or head for the back of the VW camper van, which acts like a flatbed truck, where you can rest your coffee. There are a handful of what can best be described as upturned buckets for seating, although I found it easier to stand, either on the pavement along the side of the van, or at the tailgate at the back. Either way, you’ll have some great views of the famous cable cars as they trundle past.

Once I saw that The Coffee Movement had a tasting flight, I had to try it. The only dilemma was which one? A comparison of all three as filter coffees, or pick one as an espresso, piccolo and filter? I discussed my problem with the barista, who suggested that I start with the filter flight, decide which I liked the best, then have that as the espresso/piccolo/filter flight. Now that’s my kind of thinking!

The Coffee Movement has a house coffee from Honduras, roasted by Saint Frank, which was joined by the Kenya Gichathaini from Arkansas-based Onyx Coffee Lab and the Ethiopia Dumerso from North Carolina’s Black & White Coffee Roasters. As the filter flight, you get one small glass of each, which I sipped in turn, comparing the various flavours before letting them cool and repeating the process until there was none left.

All three were very fine, subtle coffees, with the Kenyan being the sweetest, the Ethiopian the fruitiest and, to my surprise, the Honduran from Saint Frank my favourite. As they cooled, the sweetness of the Kenyan really came to the fore and, with it, it won my favour, although I’d have been very happy if I’d been served any of the three.

Turning to the single coffee flight, I would have chosen the Honduran, but having had Saint Frank Coffee on several occasions over the last two days, I branched out, deciding on the Kenya Gichathaini from Onyx. As an espresso, this was quite acidic, while in milk it was best described as interesting, the coffee and milk not pairing well for my tastes. Not that this is a criticism of either the coffee or The Coffee Movement, since the whole point of the flight is to be able to try different coffees/preparation methods/combinations.

One thing remained for me to do before I departed: to leave the lovely staff at The Coffee Movement with a gift of a bag of the Rwanda Bwishaza Lot 1, which I’d picked up from Horsham Coffee Roaster before I flew out from the UK.