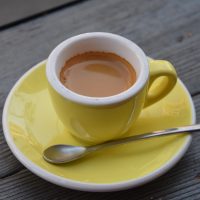 No trip to the Bay Area would be complete without a visit to San Francisco, so, with a day to spare before my meeting started on Tuesday, I hopped on the Caltrain, heading north to the city, where my first stop was Scullery, recommended by my friend Karen. In British English, a scullery is a small kitchen, a fitting name given Scullery’s size, although the actual kitchen area, behind the counter, is probably twice as big as the space allowed for customers.

Lack of size is no limit to Scullery’s ambition though. A multi-roaster, drawing from a range of local roasteries (“friends of ours” according to the manager), the concise espresso-based menu is joined by batch brew filter, several signature drinks, tea (including PG Tips) and a selection of toast-based items. These include plain toast, classic avocado toast and, in a nod to the country of my birth, Welsh Rarebit.

Scullery is on Geary Street, which marks the boundary between Tenderloin and Lower Nob Hill. It’s five blocks west of Union Square, close to the junction with Leavenworth Street. On a map, the area looks like a standard American street grid, but this hides the hilly terrain, with Geary climbing steeply towards Leavenworth which runs along the top of the north-south ridge that dominates this part of San Francisco.

It’s worth the climb though, with Scullery on the left, one door from the top. It’s a tiny spot, the central door flanked by two floor-to-ceiling windows. The bulk of the (limited) seating is outside, a single broad bucket seat fixed in front of each window, which will seat two at a squeeze. For each seat, a narrow table folds up from a planter, with two bright yellow stools on the other side.

Stepping through the door, you’re greeted by the counter, which runs the full width of Scullery. You order and collect your coffee here, with limited seating at a small, narrow bar to the right, which extends a little across the window at the front. Meanwhile, to your left, the wall is given over to retail bags of beans, coffee making equipment and a limited supply of merchandise.

The real draw is the coffee and the toast-based menu. Scullery is a multi-roaster, primarily using roasters from the local area. During my visit this included Saint Frank Coffee, with the Little Brother blend on espresso, Oakland’s 3-19 Coffee, with a single-origin, the Honduras Atanacio Nolasco, on filter, and Mother Tongue Coffee, also from Oakland. Sadly, I was still working off an enormous hotel breakfast, otherwise I’d have been drawn to the toast menu, where I suspect I would have been obliged to try the Welsh Rarebit, although there was plenty to choose from.

Instead, I settled for an espresso. I’d had the Little Brother in a cappuccino at Saint Frank Coffee in Menlo Park the day before and was curious to see what it was like on its own. My reward was a rich, smooth espresso, served in a classic yellow cup, complete with glass of water (still or, my choice, sparkling), which I enjoyed sitting outside, watching the world go by on Geary Street.