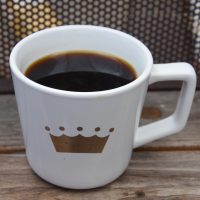 The Crown: Royal Coffee Lab & Tasting Room (The Crown for short), was the one consistent recommendation that I received for coffee in Oakland. I missed out in January 2020, my only previous visit to Oakland, since that was on a Sunday, when The Crown used to be closed. This time I was determined to catch it, popping over to Berkeley and Oakland on my last day in the Bay Area.

The Crown, which opened in mid-2019, is an off-shoot of Oakland green coffee importer, Royal Coffee. The Coffee Spot usually deals with coffee shops, plus the occasional roaster via the Meet the Roaster feature, so green coffee importers rarely feature, although if more of them did what Royal Coffee has done with The Crown, that would quickly change!

Although The Crown is a coffee bar, it’s a whole lot more than that, existing to showcase Royal Coffee’s excellent range of beans. While you can just have a cup of coffee, you’ll miss out if you dodn’t take the opportunity to explore some of The Crown’s amazing coffee, with frequently changing options on espresso, pour-over, batch brew and cold brew. There are also a small number of cakes/pastries if you’re hungry.

The Crown is on Broadway, one of Oakland’s main north-south routes linking downtown with the northern neighbourhoods. In a row of fairly nondescript single-storey buildings on the western side of the street, The Crown’s more noticeable when closed, a colourful mural decorating the roll-up shutter which comes down at the close of business every day.

This is partly explained by the building, which used to be a car showroom and, as such, doesn’t project “coffee shop” from the street. That said, since the COVID-19 pandemic, The Crown has benefited from semi-permanent outdoor seating, with two wooden bays occupying a pair of on-street parking places. Each bay, whose floor is level with pavement, has a long, L-shaped wooden bench, split into three sections by small armrests which double as coffee tables, with a third armrest at the short end of the L. There’s also a small cycle-parking area at the end.

The wooden bays give more of a visual clue that The Crown is a coffee shop, as do the three two-person fold-up tables that line the windows along the front of The Crown. The entrance is on the left, where a large, cube-shaped concrete recess has a door on the right. This opens onto the main space, a wonderfully tall single room, with the tasting room and lab areas at the back, visible through floor-to-ceiling glass walls with wooden frames.

The counter is on the right, a strange, multi-part affair backed with green, hexagonal wall-tiles. Each section is slightly curved at the front, giving the counter a ripple effect, before the final section, at the front, which curves around by 90°. This ends just short of the windows at the front, where a single standing bar, currently home to a number of plants, runs from the door across two of the four tall windows. There’s no interior seating, although you’re welcome to stand at the long, thin table which projects from the left-hand wall opposite the middle of the counter.

When it comes to coffee, The Crown exists to showcase the best of Royal Coffee’s current crop of green beans. When I was there, a pair of single-origins and a decaf were on espresso, served from a standard menu, while there were two batch-brew filter options, one light and one dark roast, plus a pour-over selection. There’s also cold brew and nitro cold brew, along with a range of signature drinks.

Having said that you’d be missing out if you just came for a cup of coffee, that’s exactly what I did. In my defence, I’d dashed across town to get to The Crown, arriving not long before closing time, otherwise I would have jumped at either the espresso or filter tasting flights. However, I knew that I wouldn’t have time to do them justice, so settled for a filter coffee, although both the espresso options, the Kenya Othaya Gura Double Washed and the Costa Rica El Diamante Anaerobic, sounded fantastic.

I asked about the pour-over options, where a single-origin Burundi was available. However, the barista was very keen that I tried the light-roast batch brew option, the Kenya Mumwe Mahiga Double Fermented Double Washed. One of the lessons that I learned early on in my time writing the Coffee Spot is never to argue with a barista’s recommendation, so naturally I said yes, being rewarded with one of the best filter coffees I’ve had in a very long time! Rich, fruity and incredibly sweet, this was an outstanding coffee, fully repaying all the effort that I’d put into getting to The Crown before closing time. True coffee royalty!