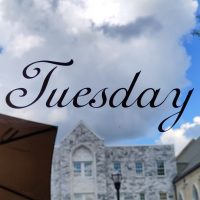 Having come from the relative coffee-rich Bay Area, with several day-trips to San Francisco and one to Oakland under my belt, I flew to Georgia at the end of July with no great expectations when it came to coffee. However, last weekend, Amanda took me over to Marietta, where we found an absolute gem in Tuesday Coffee + Shoppe, located just north of Marietta Square on Church Street.

A relative newcomer, Tuesday opened in October 2021, providing top-notch coffee (roasted by West Atlanta’s Bellwood Coffee) from a standard espresso-based menu, along with batch brew filter. There’s also a selection of other drinks, plus a range of cakes from the bakery next door, all of which makes up the coffee part of Tuesday Coffee + Shoppe.

The shop is represented by an interesting range of bespoke products displayed on the left-hand side of the neat little space. Due to Tuesday’s size, indoor seating is limited to a four-person bar, while there are two benches and four two-person tables outside on the quiet street, with plenty of shade from a combination of trees and parasols. Note that Tuesday only has takeaway cups at the moment, so don’t forget to bring your own.

Tuesday Coffee + Shoppe is on the western side of Church Street, 1½ blocks north of Marietta Square. There’s not much to it, just a simple shop front, the central door flanked by a tall window either side. Most of the seating is outside on the pavement, with a short bench under each window and a row of four well-shaded, two-person tables alongside the street, where there’s plenty of free parking.

Inside, the layout’s extremely simple. The counter, at the back, runs nearly the full width of the shop, the cakes on the left, menu and till in the middle and espresso machine, a La Marzocco Linea, at the far end on the right, its back to the wall at 90° to the counter. The only seating is on the right, where a four-person bar stands against the wall, the end nearest the counter doubling as a display area for retail bags of Bellwood Coffee.

That concludes the coffee side of Tuesday Coffee + Shoppe, with the left-hand wall given over to the shop. You’ll find all sorts over here, displayed on a large, bespoke shelving unit, beyond which are hangers for t-shirts and hand-woven baskets, plus a display stand for greetings cards. Locally-produced, bespoke items is the name of the game, with everything from peanut butter and olive oil through candles and bath bombs to pottery and jewellery. The only mass-produced things I saw were Kinto Active Tumblers.

Tuesday Coffee + Shoppe is a family affair, run by husband-and-wife Andrew (coffee) and Morgan (who curates the shop, did the interior design and runs her own photography studio). Morgan is a local, while Andrew has roots in Korea and Taiwan, studied in California and lived for many years in the UK, including Folkstone and London, where he cut his coffee teeth at the Department of Coffee. This was before moving to Marietta with Morgan, where he worked in several coffee businesses prior to opening Tuesday Coffee + Shoppe.

Next door is Lush Cakery, a bespoke cake baker which also makes all Tuesday Coffee + Shoppe’s cakes. However, the relationship goes deeper than, Tuesday occupying what used to be Lush Cakery’s tasting room. Another local connection (this time with an international twist) is the furniture/fittings, which were made by Raz, a friend of Andrew and Morgan from London who also moved to Marietta, where he founded Saha Design.

The bespoke shelving unit (one of Raz’s designs) has recently been sold to a customer of Tuesday’s to make way for an even larger unit that Raz is building. It turns out that the shop has been hugely successful, so Morgan is expanding the range of products, which in turn requires more display space, hence the bigger unit.

Turning to the coffee, Andrew uses The Reservoir, Bellwood’s “year-round” coffee, currently a Peruvian single-origin. I had a cortado in my HuskeeCup, while Amanda borrowed my Frank Green Ceramic for a flat white, which she said was like drinking chocolate cake. Normally I prefer a cortado to a flat white, but in this instance, the extra milk really rounded out the coffee, which made me want to try it as an espresso. As a result, I bought a bag to take back to Amanda’s, using her Coffee Gator espresso machine to pull a surprisingly good shot. It wasn’t quite what I was expecting from how it was in milk, but it was really tasty, a nicely balanced, well-rounded espresso.

August 2022: I actually managed this sooner than I expected, popping back the day I published this Coffee Spot. As well as trying the espresso, which was even better than the one I’d made, I also dropped off a gift, a bag of the Baroida Estate, a naturally-processed coffee from Papua New Guinea that I’d bought at CoRo Coffee Room in Berkeley earlier on in the trip.