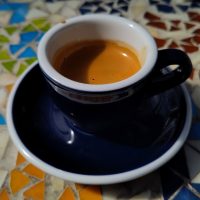 As explained in Monday’s Coffee Spot, Bellwood Coffee, at the start of October I’d taken the train from New York to Atlanta, where Amanda picked me up to begin a four-day road trip to Madison, South Dakota. Our first stop was Chattanooga, where we came across Niedlov’s Cafe & Bakery on Main Street, chosen largely because it was open after 5 o’clock and had a large garden where we could sit with Fergie, Amanda’s dog.

I knew nothing about Niedlov’s but was sold the moment I saw the Slayer espresso machine on the counter, along with boxes from Onyx Coffee Lab on the shelves. It may have been a chance discovery, but I couldn’t have asked for a better introduction to Chattanooga, or indeed to Tennessee, since it was my first time in the state.

Niedlov’s is a bakery/cafe which takes its coffee as seriously as its bread (and it takes its bread very seriously indeed). A standard espresso-based menu features Onyx’s Monarch, along with its Southern Weather on batch brew filter. There are separate breakfast and lunch menus, plus cake and, of course, bread, all of which can be enjoyed in the spacious cafe or outside in the garden.

The family-owned and operated Niedlov’s has been baking bread using organic wholegrains and natural leavening since 2002. It’s on the north side of Main Street, opposite the fire station, occupying the left-hand one of a pair of old, brick-built buildings with a small parking lot (providing free two-hour parking) down the side of the building.

Looking from across the street, Niedlov’s appears to have three separate store fronts, each with a pair of white-framed windows and a door, but only the left-most is in use. If you want to sit outside, there are a pair of round, two-person tables on the pavement on the busy Main Street, but you’re better off doing what we did and sitting around the corner in the leafy garden which is down the left-hand side of Niedlov’s. This is fenced off from the street/parking lot by waist-high railings and features plenty of trees and shrubs to provide shade, along with its own water feature.

There are about a dozen tables out here, a mix of two-, three- and four-person ones, while access to the garden is either from the parking lot to the rear, or via the cafe, where there’s a door in the left-hand wall at the front of the garden. Stepping inside, you find yourself in large, bright, high-ceilinged space, the modern, exposed air-conditioning conduits surprisingly at ease with the exposed brick walls.

The cafe, which runs the full width of the building, is about half as deep as it is wide, with the counter at the back on the left, the bakery and kitchen visible through the windows behind it. The seating is a similar mix of tables, with more than a dozen well spread out across the cafe, along with a three-person window-bar to the right of the door onto Main Street.

The counter is a thing of beauty, starting with a display of the various loaves on offer, while the menus are on the back wall. Next comes the cakes and pastries, followed by a chiller cabinet with cold drinks. Finally, you reach the till, where you order and pay, before moving along past the Slayer espresso machine to collect your drinks at the far end (your food will be brought out to you).

We actually visited Niedlov’s twice, once at the start of our road trip and again at the end as we retraced our steps to Atlanta, having spent three days in Madison, South Dakota. On our first visit, we were desperate for something to eat, staring longingly at the lunch menu, despite the kitchen having been closed for over two hours (lunch stops at three o’clock and we arrived just past five). Instead, we had a Cheddar pepper loaf, which we consumed in the garden, with nothing more than butter, which was all that it needed.

On our return, we timed things better, arriving for lunch, where I had the veggie sandwich, Amanda, the lox & bagel, with Len, Amanda’s step-father, having a Reuben. Remembering the bread from our first visit, we also bought four loaves, a baguette, two bagels and three cakes/buns to take home with us, all of which were excellent.

Turning to the coffee, Len, who is not necessarily what I’d describe as a speciality coffee convert, thoroughly enjoyed the Southern Weather batch brew, which he had on both occasions, while Amanda enjoyed her two cappuccinos. I, on the other hand, started with a cortado on our first visit, following that up with an espresso on our return, Onyx’s Monarch proving to be just as good in milk as it was on its own. In milk, it provided notes of malted chocolate, while as an espresso, it was smooth and well-balanced with a hint of brightness to it.