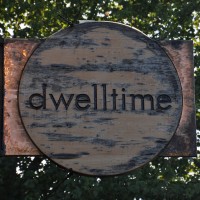 I visited Dwelltime in Cambridge (Massachusetts, not UK) on my coast-to-coast adventure in June last year and, since I’m now back in Boston, I thought it was high-time I published it! However, since my original visit, Dwelltime has renamed itself barismo 364 to better reflect its ownership (although I quite liked the name Dwelltime).

Dwell-barismo-364-time (henceforth barismo 364) opened in 2012 as the flagship coffee shop for local roaster barismo. It incorporates a full kitchen at the back of the store, where all the food is prepared and all the cakes, cookies, etc are baked. It also has a lovely island counter, which was all part of the fit-out when barismo took over the disused Hubley auction house on Broadway.

Barismo offers two options (during my visit, a blend and a single-origin) plus decaf on espresso, while there’s also a full filter-bar, offering a pair of single-origins through the V60. Unusually for an American coffee shop, there’s no bulk-brew filter (something it shares with Render Coffee). If you’re hungry, there’s an extensive lunch menu and a range of cakes, cookies and pastries. At weekends, there’s also a full brunch menu until 2.30 and a ban on laptops.

Barismo started as a roaster in 2008, interested in quality, analytics and transparency of sourcing. It started life in Arlington and opened what was then Dwelltime as its flagship store in 2012. In 2015, it acquired Voltage Coffee & Art, which has been renamed barismo 295. Each store has taken it closer to Boston and, if you draw a line through all three and extend it, it goes through the heart of downtown Boston… Just sayin’…

Back to barismo 364. On the southern side of Broadway, which runs through the centre of Cambridge on its way to Harvard, its northerly-facing façade doesn’t catch much sun, except first thing in the morning. The layout’s fairly simple, a rectangle, short side facing the street, recessed door in the centre, windows to either side.

The key to store’s success, other than the great coffee, is the island counter. This sits squarely in the centre, dividing everything as you enter. To the right, there’s the retail section, while to the left there’s the seating. Sensibly, you go to the right to order, keeping the waiting hordes away from those sitting on the other side of the counter. If you’ve ordered a drink (to stay in or takeaway), you progress back to the top of the counter (opposite the door) where you collect your drink from the left-hand side of the counter (by the filter bar). Then, if you’re heading off, you’re back out the door, while if you’re staying, it’s a short walk to your seat. As much as I dislike counter-service, this is the best implementation that I’ve seen.

With the exception of a handful of tables occupying the space between the counter and kitchen (right at the back of the store), the seating’s all on the left-hand side. If you want a table, there’s an eclectic mix running along a padded bench along the left-hand wall. Alternatively, sit at the counter on a bar stool, where, if you pick your spot carefully, you’ll have the filter bar to your right and the espresso machine opposite, so you can geek out watching all sorts of coffee being made.

The counter is an interesting construction, effectively flat on the right-hand side, with a lovely curve where you sit on the left-hand side. The first of the tables on the left-hand wall also mirrors this asymmetric construction. Since there’s not that much natural light, particularly at the back, the interior is generously lit with multiple lights.

When it comes to the coffee, barismo roasts all its own in Somerville (sadly the roastery is not open to the public). There are usually two single-origins on espresso and another two through the V60. However, while I was there, there was a blend (admittedly of two Costa Rican single-estate beans) plus a single-origin from Peru. Depending on the particular coffee on offer, some of the espressos will only be offered with milk.

At the recommendation of Kristina, my barista, I tried the blend (Reposo) as a cappuccino, which demonstrated just how well it went with milk. It was rich, smooth and creamy, served in a lovely tulip cup. I followed this up with a pour-over of the Marimisa, which I took away with me in my UpperCup. This too was lovely, a well-balanced, smooth brew.