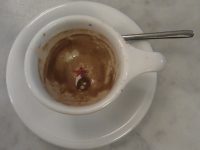 If I was still running the Where It All Began Coffee Spot Award, then the subject of today’s Coffee Spot, Intelligentsia’s branch in the Monadnock Building, on Jackson Boulevard, right in the heart of downtown Chicago, would be a shoe-in. It’s the second-ever Intelligentsia, a Chicago coffee roaster which now boasts six coffee shops in that city, plus three in Los Angeles and the High Line Hotel in New York City.

I think the Jackson Boulevard branch opened in 2002, but it was certainly there when I first visited Chicago in 2003. It’s quite possibly the first speciality coffee shop I ever visited, although back then I had no idea that speciality coffee shops existed. All I knew was that Intelligentsia served exceptionally good coffee.

Since then, I’ve become a regular visitor, regular in that I pop in whenever I’m in downtown Chicago. My latest visits came as part of my coast-to-coast trip across the USA last year, when I called into Intelligentsia twice, once when I arrived in Chicago and again, two days later, when I left. I’m pleased to say that it looks and feels very much how I remember it from that first visit all those years ago in 2003…

Intelligentsia occupies a corner on the ground floor of the hulking Monadnock Building on Jackson Boulevard and Federal Street. The building itself is worth a second look: built in 1891, it was an early skyscraper, once the largest office building in the world, and, to this day, still the tallest load-bearing brick building ever constructed, representing the pinnacle of a technology that was quickly surpassed by the steel-framed skyscrapers that now dominate cities around the world.

Intelligentsia modelled its second branch on an Italian espresso bar, with a marble-tiled floor and marble-topped tables. A simple rectangle, the main entrance, an airlock-style arrangement, is on Jackson Boulevard. There are two further entrances at the back, just in front on the counter, which runs the width of Intelligentsia. One, to the right, opens directly onto Federal Street, while to the left, another door leads from the lobby of the Monadnock Building.

The seating’s at the front. There’s a window-bar to the right of the Jackson Boulevard entrance, wrapping around to the first window on Federal Street, before giving way to large sets of retail shelving, selling Intelligentsia’s full range of coffee, plus various coffee-making equipment. There’s another window-bar on the left, with an excellent view of the lobby, while six round, three-person tables from two rows of three in the middle of the room. The area in front of the counter is sensibly left free for customers who are ordering/waiting for their coffee.

There’s a generous supply of cakes and pastries to the right, which you pass when entering from Federal Street. Next comes the espresso machine, till and filter area. On my first visit, I had my usual espresso, the Black Cat blend, which I’m particularly fond of (a single-origin is also available). Jeff, from Asado Coffee, had a cortado.

On my return, my friend Marc and I sampled the filter coffee. Unusually, Intelligentsia doesn’t do bulk-brew filter, just hand-pour through V60, Chemex and (a new one to me), Solo, a different single-origin on each one. To avoid queues, individual V60s are made ahead of time on an almost continual basis; Intelligentsia being sufficiently busy that they rarely go to waste!

We ordered a Chemex (La Tortuga, Honduras) and a Solo (Matalapa, El Salvador). The Solo consists of a thermally-insulated jacket around a thick, glass flask. Coffee’s put in the flask, water’s added and the coffee allowed to bloom for a minute, then the remaining water’s added. Once brewed, the coffee’s poured through a filter in the stopper at the top. It’s a similar to the cafetiere, but, according to my barista, cleaner and more consistent.

Intelligentsia also knows how to serve its coffee: half is poured into a pre-heated mug, the remainder placed in a small, pre-heated glass carafe, all then presented on a wooden tray. The Matalapa (Solo) was a good, smooth, well-balanced cup of coffee, while the La Tortuga (Chemex) was similar. While I could tell it was different, in a blind tasting, I’d have struggled to tell which was which (that’s down to my palette, not the coffee!).

I paired these with the aptly-named morning bun, a delightful concoction of light pastry dough, topped with crunchy sugar. It made for a good start to my day, not being too sweet, but substantial enough to get my teeth into.

If you liked this Coffee Spot, then check out the rest of Chicago’s speciality coffee scene with the Coffee Spot Guide to Chicago.