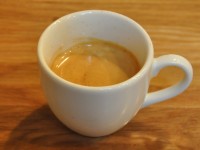 Pickwick Place has only been open since October 28th last year. From the street, your first hint is the quirky A-board at the entrance to the alley. Glancing in, you’ll see a row of tables running down either side. South-facing, with high-sided buildings as its neighbours, Pickwick Place is beautifully sheltered and yet catches the sun. That said, the buildings provide some shade, protecting you from the worst excesses of a Chicago summer’s day. The only downside is that when it rains, there’s not a great deal of cover. It’s bright enough in daylight, but overhead lamps strung across the alley ensure it’s well-lit when it gets dark.

The tables, four on each side, are small and round, each with a pair of chairs, although you could probably rearrange them if the fancy took you. If you go past them to the back of the alley, you’ll find the coffee shop itself. This is built into a beautiful brick structure between the two buildings, faced by a blue, half-timbered door, windows on either side.

It’s one of the most attractive spaces I’ve been in for a long while. The only downside is its size: there really is no space for any seating, save for one solitary chair to the left, snuck in between the menu and the counter. Honestly though, if I were a regular, that seat would be mine, from the moment I arrived until the staff levered me out (or locked me in) at closing time! Chair aside, there’s only enough space inside to wait while you order and collect your coffee before taking it back outside with you.

The interior is faced with original, bare brickwork and has incredibly high ceilings, from which six lamps are suspended on long cords. The L-shaped counter is an amazing tiled affair, with a lovely wooden top. L-shaped, it occupies the back half of the space, the bottom of the L extending forwards on the right-hand side. Here you’ll find the till, followed by a beautiful Kees van der Westen three-group lever espresso machine (Asado only uses lever machines). Along the long part of the counter, facing the door, there’s a couple of shelves with Asado’s beans and some coffee kit for sale, then comes the filter rack. Behind the counter, against the back wall, is an EK-43 for the filter coffee and a bulk-brewer for when it’s busy.

I visited Pickwick Place twice, once on my whirlwind tour, and again two days later, when I was well looked after by the lovely Jake and Anna. Due to space limitations, there’s only one grinder, so there’s no decaf or single-origin espresso, just Asado’s Reserve espresso, a blend of Ethiopian Sidamo and Java Island. I had a shot of this and I have to say that it was one of the best espressos I’ve had in a very long time. It was beautifully balanced, a complex set of tastes, all in perfect harmony, and with a glorious mouth-feel. I followed this up with a cortado and while I liked it, I have to say that I felt the espresso didn’t go quite as well in milk, the milk not quite achieving the same perfect balance as the espresso alone. Either way, though: two damn fine cups of coffee!

December 2015: Asado was a runner-up for the 2015 Coffee Spot Award for Best Espresso.

May 2016: You can also see what I made of Asado’s River North branch, which opened at the end of 2015, although I got a behind-the-scenes preview tour!