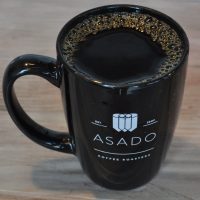 September 2017: I finally managed to visit Asado’s River North location for the first time since it opened. Not a lot had changed since my behind-the-scenes tour, with the obvious exception being the roaster, which is no longer there, freeing up extra seating space. The espresso machine has also changed, with the lever machine being replaced with a more conventional Faema one.

August 2018 Looks like Asado is gone for good. The River North location is shut up and the security guard says it has been closed for about four months. I believe the Lake View location is still open though.

Asado’s River North branch is in the ground floor of an office building, accessible through the lobby. You enter through glass double doors, with the lobby ahead, up a short flight of steps. Asado itself is to the left, separated from the lobby by wall-to-wall, floor-to-ceiling glass dividers, with their own pair of glass double doors. There is also a raised seating area to right (go up the steps and double back on yourself) which I believe that Asado customers can use.

The coffee shop itself is an amazing space. It occupies what was the building’s old loading bay (in the days before it was an office building), and is long and thin, with an extremely high ceiling (it’s probably taller than it is wide). The long side runs along the street, and is punctuated by two sets of generous, floor-to-ceiling windows, which, when coupled its physical dimensions, give it an immense sense of space.

The loading bay’s original clam-shell loading doors take up most of the back wall, starting maybe a metre off the ground. These can still be opened up, allowing the possibility of more, linked seating space for the coffee shop in the area above/behind the counter, which would be amazing.

The layout is simple. Entering from the lobby, the counter occupies the bulking of the back wall (to your right), while to your left, there are window-bars in both windows, separated by a chunky brick pillar. The first has some really comfortable high bar chairs, with coat hooks at either end. The second window has a garden bench and another high chair, although this arrangement might have changed since I was there. Finally, at the far end, against the wall, is the roaster. The only other seating is tucked in immediately to your right, between the counter and the lobby. This cosy seating area is centred on a built-in barbeque/stove and has a couple of very comfortable armchairs.

The décor is exposed brick, with a concrete floor, and an exposed wooden ceiling high above you, giving it a very industrial feel. The hand-built counter is made from wood reclaimed from a farm, while other features, such as the owl and the coach-lights on the walls, are reclaimed from local buildings.

Jeff told me that Asado’s philosophy was to establish direct-trade relationships with the coffee farmers where possible, and to only roast on bespoke, analogue roasters, using no computer control. Asado likes to roast light, roasting in small batches of a few kilos at a time, the roasting taking place during shop hours, where everyone can see what’s going on.

I’d tried Asado’s Reserve espresso, a blend of Ethiopian Sidamo and Java Island, at Pickwick Place, where I’d been pulled a beautiful espresso shot. However, Jeff was keen that I try it as a filter and so made me a pour-over. This turned out to be a very smooth coffee, with subtle, fruity overtones, but very well balanced (something it also displayed as an espresso).