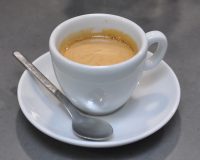 When I started working in Sheldon Square, around the back of Paddington Station, in the summer of 2013, there was no decent coffee to be had. Anywhere. Then came Beany Green in 2014, followed by KuPP and Kioskafé in 2015. Then, in the very week my job came to an end, the works canteen was taken over by Baxter Storey, using coffee from Modern Standard. Talk about bad timing!

Since then Can Do Coffee has moved in, but all of these have been east of Sheldon Square. Until, that is, Store Street Espresso moved into the lobby of the office block on 2 Kingdom Street, literally around the corner from my old office. I made one attempt to visit a few weeks ago, but managed to pick the one day Store Street was closed for the installation of a new concrete counter-top. What was it I was saying about timing?

However, last week I was back, ironically in a new job, but working for four days in the basement of my old office. Fortunately we were occasionally let out for good behaviour, so I made the most of my opportunities to pay daily visits to the new Store Street Espresso…

June 2018: Sadly, Store Street Espresso has had to close its Paddington branch.

Store Street Espresso is on the far side of the massive lobby of the soaring office block that is 2 Kingdom Street. Don’t be put off though: anyone is allowed into the lobby and hence has access to Store St. In contrast, to get to The Works Café, which is in my old office building, you have to be either staff or a visitor and, if you’re a visitor, you need to be escorted at all times, even when you’re getting coffee. Ironically it was far easier for me to be let out of the building to get my coffee from Store St or Beany Green than it was to visit The Works Café…

So, back to 2 Kingdom Street. Just stroll in and head diagonally across the lobby, ignoring the reception desk and the security barriers by the lifts. On the far side you’ll see what looks like a row of offices/kiosks running off to your left. There are also some tables here and more off to the right. However, what we’re looking for is directly ahead, tacked, it seems, onto the end of the row of offices. This standalone counter is the home of the latest Store Street Espresso, following on from the original on Store Street and its sister branch, Continental Stores.

There’s not a lot to the new Store Street. It really is just a counter, behind which the barista, Aurelien, serves some excellent Red Brick espresso from London stalwarts Square Mile (as an aside, if Aurelien’s not there, just wait; he’s usually somewhere in the vicinity and will, as if by magic, appear, usually from whichever direction you’re not looking at the time). If you’re hungry, there’s a small selection of cookies and pastries, plus some tasty-looking sandwiches. Although it feels like it should be a takeaway-only joint, Store Street has proper cups, which is a bonus. You’re welcome to have your coffee while standing at the counter chatting with Aurelien or to take it to one of the nearby tables. Of course, you can also get a takeaway if you need to get back to your basement (err, I mean office).

There are no pour-overs or guest single-origin espressos, but what Aurelien does, he does very well. I turned up on Monday for a flat white and returned each day thereafter. On Wednesday I visited Aurelien twice, first for a flat white, before returning after lunch when he pulled me a lovely espresso. Normally I’m not the biggest Red Brick fan, but this was excellent, a really well-balanced but fruity shot. I was so impressed that I returned on Thursday, my last day, when I had another one and finally admitted who I was…