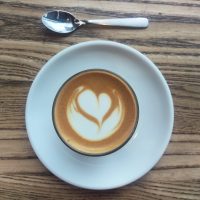 My final instalment from this summer’s trip to Copenhagen is perhaps its most famous name in coffee, the Coffee Collective. Known across Europe for the standard of its roasting, the Coffee Collective also has three coffee shops: the original, out to the west of the centre, the second, in the nearby roastery, and this, its third, right in the heart of the city at Torvehallerne, once again demonstrating that speciality coffee can thrive in the mainstream if done properly.

Torvehallerne is a food and produce market, which reminds me of Boston’s Public Market, where George Howell is doing a similar thing. The Coffee Collective occupies a long counter at the end of the eastern of Torvehallerne’s twin halls. There’s plenty of space, and a limited amount of seating in the shape of window-bars, although you can also take your coffee and make use of any of the public seating areas.

Talking of the coffee, it’s what you come here for. There’s a choice of a blend, single-origin or decaf through the Kees van der Westen espresso machine, or you can have one of three single-origins as a Kalita Wave pour-over, with a fourth on bulk-brew if you’re in a hurry.

Torvehallerne stands just to the west of Copenhagen’s Nørreport, occupying a large, open space between two busy roads, Frederiksborggade to the north and Vendersgade t the south. Twin halls with high, peaked roofs, run perpendicular to the roads, each housing two rows of stall, with a central aisle and aisles down either side, plus plenty of cross walks. There are all sorts of food-related businesses here: grocers, butchers, bakers, speciality shops, all selling produce.  You can also get anything from a cup of coffee through a snack to a full-blown meal, either to go or to eat there and then.

The stalls can be full width, spanning a complete row, like Coffee Collective, or they can be half width. These means that some stalls only face onto a single aisles or cross walks, so if you really want to see the full range of what’s on offer, you have to pretty much walk around the whole place. More stalls can be found outside, between the two halls, which mostly cater to street-food operations, although you’ll also find a fruit and vegetable market out here.

Depending on which end of Torvehallerne you enter, Coffee Collective is either immediately on your left, or it’s at the far end on the right. Either way, it’s opposite Laura’s Bakery, occupying a corner spot. The counter runs the full width of the stall, facing the front (or back) of Torvehallerne. For seating, there are two bars in the windows in front of the counter and two more down the aisle to to the right, each seating four people on bar stools.

You order at the end next to the central aisle, then move down past the three Mythos 1 grinders and the shapely curves of the Kees van der Westen espresso machine to the collection point. Carrying on, there’s the brew bar, where the Kalita Wave pour-overs are made, with its built-in hot water dispenser and EK-43 grinder. Finally the water station is at the end of the counter. On the work surface behind the counter, there’s a bulk-brewer, with a flask of coffee ready to go for those who don’t want to wait. A map of the world on the wall behind the counter shows the tropics (that is, the coffee-growing areas)

At the recommendation of Nicholas Muncey, I tried the single-origin espresso, a Kenyan Kieni. However, he neglected to say espresso or with milk, so I tried it as both, ordering a single-shot espresso and a cortado.

The espresso was bright and fruity, perhaps a little too much for my palette, the first mouthful (literally) sending a shiver down my spine. The second mouthful was mellower, but still retained the fruity zing of the first. In milk, however, it lost none of its fruity character, the brightness of the coffee offering an interesting contrast to the sweetness of the milk. I often find that in these circumstances, the milk and coffee can be in conflict with each other, but here, while I wouldn’t call the end result harmonious, I would say that they complemented each other, making an interesting change.

You can also buy any of the beans to take home with you and while there isn’t any food, there are plenty of options in the rest of Torvehallerne if you’re feeling hungry.