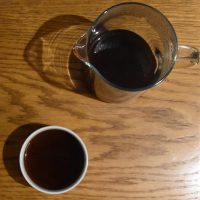 With all the travelling I’ve been doing recently, it’s been increasingly hard for me to get around the UK like I once did. Even so, I was rather embarrassed to discover that it’s been three years since I last visited Edinburgh. Unsurprisingly, rather a lot has changed since my last visit, including plenty of new faces and a few changes at some well-known old faces.

Where to start? Well, let’s try Lowdown Coffee on George Street, right in the heart of Edinburgh, which opened in February 2016, just across the way from old favourite and Edinburgh stalwart, Wellington Coffee. Like Wellington, Lowdown Coffee follows the tried-and-tested Edinburgh tradition of locating your coffee shop in a basement, which gets a thumbs up from me.

However, that’s where the similarities end. Lowdown Coffee is on a mission to do things differently. For starters, there’s table service, a refreshing change from queuing at the counter. The coffee, which changes weekly, is drawn from some of the best roasters across Europe, with one option on espresso and two on pour-over through the Kalita Wave. How about the daily food menu? Or the water, with different formulations for different beans? And that’s just for starters…

Lowdown Coffee is on the south side of Edinburgh’s George Street, accessed via a long, thin basement courtyard which provides both sheltered outdoor seating and a reasonable amount of natural light. A flight of steps leads down to the courtyard, while the door is at the other end, sheltering under an arch carrying steps to the shop on the floor above.

The courtyard houses three small, round, two-person tables, two along the front of Lowdown, between the bottom of the steps and the door, while the third is opposite the door, nestling under cover of the arch. Inside, Lowdown is equally long and thin, effectively an L-shape, wrapping itself around a small kitchen at the back/right. The décor is simple and functional: white plastered walls, a concrete floor, white ceiling and strip lights supplementing the natural light from the two windows in the front.

Given the lack of space, Lowdown has dispensed with the traditional counter. Instead a long workspace runs along the back wall, housing the single EK-43 (which does all the grinding), two-group Slayer espresso machine and a large pour-over area, with soup canisters at the far end.

There’s a tiny counter, bearing cakes and the till, directly in front of the door. You pay here on leaving, or when ordering takeaway, otherwise take a seat and someone will be along with a bottle of water to take your order.

Lowdown has staples such avocado on toast, sandwiches and soup, along with a hot and cold dish of the day, featuring plenty of vegan options. The coffee doesn’t change quite as often, with Lowdown buying in small quantities (enough, on average, for seven days) then moving on. Three roasters (Colonna Coffee, Gardelli and Coffee Collective) are represented, along with a fourth which changes between two Swedish roasters, Koppi and Morgon Coffee Roasters.

My chances of sneaking in to try the coffee unannounced were foiled when I was spotted by the owner, Paul (who I’ve known for years). Rather than order anything specific, I told him to surprise me, starting with a naturally-processed Ethiopian Dimtu Tero from Colonna. This was pulled (for those that care) at 5-bar pressure on the Slayer using re-mineralised Edinburgh tap water. Served in an oversized white, handless cup, it was a sweet, complex, but well-balanced coffee.

Next came a pour-over, a washed Kenyan from the Rutuma Cooperative, roasted by Morgon. This was served in a large, glass jug, with another of the espresso cups on the side. This was absolutely gorgeous, a rich, well-rounded coffee that grew on me as it cooled, getting fruitier as it went. It was just as good, if not better, when cold.

Lowdown goes to even greater lengths for pour-over, having a choice of plain tap water, re-mineralised water (to the Brewers’ Cup standard) and a third which is midway between the two. When a new coffee is dialled in, the staff taste-test it with each of the three formulations, selecting whichever tastes the best.

What was interesting is that Paul served me both coffees without telling me anything about them, so I drank them without any pre-conceptions. Both were outstanding in their own right, but with very contrasting profiles.

December 2018: Lowdown Coffee was a runner-up for the 2018 Most Passionate About Coffee Award.