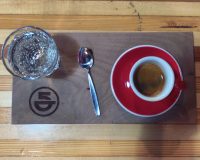 I popped over to Madison for a week of visiting friends, not necessarily expecting to find great coffee. However, serendipity had other ideas. Rather than hang out in my friend’s house while she was at work, I decided to come into the office with her and then find a coffee shop for the day. And it just so happens that two blocks from the office is the totally awesome 5th Element Coffee.

5th Element was established in 2015 by Alejandro Mendez, the 2011 World Barista Champion, along with Todd Allbaugh, who I was fortunate enough to meet. Serving only single-origin coffee, 5th Element’s main claim to fame is its close ties with coffee farmers in El Salvador, where Alejandro sources and roasts the coffee at 4 Monkeys Coffee Roasters. The coffee is then flown over to Madison every couple of weeks.

5th Element occupies a corner unit on the north side of University Avenue, west of downtown Madison. A large, open, uncluttered space, there’s plenty of seating at numerous communal tables at the back, plus a small outdoor seating area set back from the road to the right. If you’re hungry, there’s a small range of panini, waffles and cakes.

August 2017: I’ve heard the sad news that 5th Element has unexpectedly had to close. Coffee shops come and go, but I’ve not been this disappointed to learn of a coffee shop closure in a long time. On the plus side, at least I had a chance to visit while it was still open. Hopefully Todd and 5th Element will be back in some form, so watch this space!

5th Element Coffee has an all-glass front, with windows down the first third of the right-hand side, so the front’s flooded with sunlight, while the rear makes do with borrowed natural light, supplemented by a smattering of lights hanging from the ceiling, giving it a subdued atmosphere. This is reinforced by the décor: concrete floors, black-painted breeze-block walls and, other than a riveted metal ceiling over counter, open to the black-painted air-conditioning pipes. This high ceiling gives 5th Element an immense sense of space, helped by the decision not to cram too much furniture in.

The door’s slightly recessed on the right, a four-person bar occupying the entire window to the left. To the right, there’s a takeaway station between two concrete pillars, then a door to the outdoor seating area, consisting of a handful of well-shaded tables by the windows on the right-hand side. A huge counter runs lengthways against the left-hand wall. It extends about half-way back, but such is 5th Element’s size, it really doesn’t dominate. Everything has plenty of space, including the Victoria Arduino Black Eagle espresso machine and the pour-over bar. There’s cold brew and the obligatory bulk-brewers (only available until 10 am) behind the counter at the front, while at the back, there’s ample space for food preparation.

Window-bar aside, the seating’s at the back, with five large communal tables and two smaller ones. The first of these, a six-person table against the right-hand wall, follows immediately on after the windows. There’s a three-person table next to another concrete pillar, with a second six-person table towards the back. Finally, in the corner itself, is a pinball machine, with a television high up on the wall.

5th Element opens out on the left beyond the counter, with another six-person table against the left-hand wall and a three-person table in the back-left corner. Another six-person table projects lengthways from the back wall, which isn’t quite square on, making the table at a slight angle. Finally, a four-seater table, sits right in the middle, angled at 45 degrees.

5th Element only serves single-origins, with two options on espresso, both roasted by 4 Monkeys in El Salvador. While I was there, these were a Finca Esparanza and a Santa Rosa, also available on pour-over (Chemex, V60, Kalita Wave or Aeropress), along with two more from El Salvador. To balance things out, 5th Element carries single-origins from local roaster JBC on pour-over (Rwandan, Ethiopian and Costa Rican during my visit), one of which is also on batch-brew. A new coffee is available every month or so.

I had the Finca Esparanza as both espresso and V60 pour-over. As an espresso, it was really rich and juicy, with an all-round mouthfeel, while the V60 was initially a little hot, but as it cooled, it came into its own. The same juiciness was there, but with a much mellower taste. It more than held its own, tasting just as good, if not better, at the bottom of the cup.

The following morning, I returned to try the Finca Esparanza as a cappuccino. As good as it had been as an espresso, this was better, with an amazing, rich, sweet, caramel taste, helped by some awesome organic milk from a Wisconsin farm. I paired this with a morning bun, which was served warm and had a gorgeous, rich pastry and a cinnamon sugar topping, but was neither sickly nor overly sweet.

Finally, on Todd’s recommendation, I had a Kenyan from JBC (which wasn’t on the menu) as a V60, another rich, juicy, coffee, but quite different in character from the El Salvador.