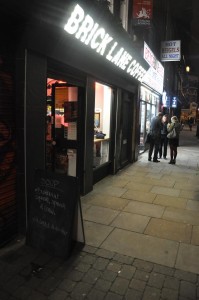 I was going to start by describing Brick Lane Coffee as “funky”. Or maybe “quirky”. Or something like that. But that’s lazy and unhelpful shorthand. Brick Lane Coffee is very much its own place. My love-hate relationship with it started with an argument over misplaced apostrophes on Twitter and went up/downhill from there.

I love the attitude; I love the décor and the feel of the place. I even love the loud music, which is rare. So that’s the love part. But, but, my espresso was served in a paper cup! A paper cup, I tell you. Hang on a second while I go bash my head against a wall… Okay, that’s better. Oh wait, the room’s started spinning. I’d better sit down.

Espresso in a paper cup? Noooooooo. And it’s good espresso too, the sort that deserves a proper cup. On the plus side, I was told that I could have a discount if I brought my own cup next time. I’ll let you know how that goes…

August 2016: Brick Lane Coffee has closed its doors for the last time…

The place itself is long and thin with tables down one side and sofas, armchairs and comfy benches down the other. There’s free wifi, loads of power outlets and, when I was there, some great blues/rhythm ‘n’ blues playing. And it’s got perhaps the best wall paper I’ve ever seen in a café. If that’s not enough, there’s chalk graffiti on the walls and on the wood-panelled ceiling and you’re welcome to add to it (although I suspect writing on the wallpaper might be frowned upon). There’s also money glued everywhere…

In short, Brick Lane Coffee is very much my kind of place. I was there late on a Thursday evening and it was bustling even then, which is always a good sign.

The coffee, as I’d hoped, was excellent. The espresso was rich, short and with a good crema, but it was served in a paper cup. I could have cried. In fairness, the staff weren’t picking on me; all the coffee is served in paper cups. I was given a couple of reasons for this: (1) no need for washing up and (2) when there were cups, they kept getting nicked. Either way, espresso which is this good demands to be served in a proper cup. On the plus side, now I know, I’ll bring my own cup on my next visit. Just in case, though, I’m going to handcuff it to my wrist (I am, perhaps, overly fond of my espresso cups…).

Let’s make it clear, though, other than the paper cups, Brick Lane Coffee wins hands down when it comes to coffee. As well as the beast of an espresso machine, there’s filter coffee (or Chav Coffee as it’s called by the Brick Lane folks; I’m saying nothing). On my visit, Brick Lane Coffee had two grinders, one for regular and one for decaf. And it only had two because the third was off having its blades sharpened, having worn itself out on the guest coffee. That’s right, there are normally three grinders: regular espresso, decaf, and a guest blend. Now that’s coffee dedication.

If that wasn’t enough, there’s a decent range of sandwiches and baguettes. I was feeling peckish while I was there, and had an excellent English Muffin with scrambled egg and cheese. Like the coffee, it comes in a takeaway box, but, unlike my espresso, this actually enhances the taste/experience. I know, I’m awkward, aren’t I?

Anyway, if I haven’t convinced you by now, I’m not going to. Give it a go, let me know what you think. I’ll report back after my visit with the handcuffs…