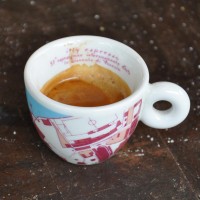 Originally, this was going to be a post about the Real Food Market at the South Bank Centre, London. It was going to feature, among others, the Bean About Town coffee cart, but then I got to talking with Claire, the wonderful French lady who runs the cart, and slowly the focus changed… When she produced an exquisite single espresso, poured into a proper, china cup, I was sold.

Standing by a Citroën H van in all weathers might not be everybody’s idea of the perfect coffee spot. It certainly doesn’t tick the laptop friendly box. But when it comes to sheer coffee passion, then you’re going to have to go a long way to beat Claire and her Bean About Town coffee cart. And she makes damn good coffee too. Being outside and exposed to the elements might provide some with reason to compromise, but not Claire. If you are around the South Bank on a Friday, Saturday or Sunday, then pay her a visit and you won’t be disappointed.

June 2017: Bean About Town’s owner sold up at the end of 2016, but the Citroën H van and Claire are still going strong, operating as For the Good of the People Coffee.

October 2022: For the Good of the People has now moved, along with the Real Food Market, to Euston Station.

As regular readers will know, I have a thing about food markets. I’ve been aware of the Real Food Market at the South Bank Centre in London for a while now. Indeed, I went up to London specifically to do a post on the Market, which, while you could argue isn’t a coffee spot in the purest sense, has three places selling takeaway coffee, one selling beans and a host of other excellent food outlets.

However, I was led astray by the Bean About Town coffee cart. Originally, it was just going to feature in the post on the market (don’t worry, there will be a post on the market at some point in the future).  However, Claire, who runs the cart, seduced me with her passion about coffee and the rest is history!

Regular readers will know that I have this thing about espresso being served in proper cups, even at takeaway outlets. It’s just not the same in a paper or plastic cup: the espresso loses something. So, when I rolled up at Claire’s cart, strictly a takeaway operation, and was offered an espresso in a proper, china cup, I was sold (I’ve since been back and also had espresso is some lovely shot glasses). Anyone who takes that much care about her coffee deserves to thrive. It didn’t hurt that it was a very pretty cup, but that’s by the by.

It was an exceptionally good espresso too, nice and short, strong, smooth and with an excellent crema. In the interests of thoroughness, I also sampled Claire’s Café au Lait (“it’s a latte,” she said, “but since I’m French, I call it a Café au Lait”: there’s no arguing with faultless logic like that!). This too was superb, again quite short, with rich, velvety milk, which mingled with the coffee and left the sides of the cup coated all the way down, the tell-tale sign of an excellent latte or flat white.

If you come across any in your travels, give them a go and let me know what you think. If you want to try Claire’s Citroën, you need to walk away from the river, towards Waterloo, with the Royal Festival Hall on your left and you will find Claire’s van at the bottom of the steps on the left hand side. If you are anywhere in the area on a Friday, Saturday or Sunday and you want a top-notch cup of coffee, then this is the place to go.