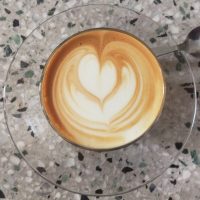 Not that long ago, London’s Waterloo Station was a bit of a desert for good coffee. There was the Scooter Café on Lower Marsh, plus Bean About Town’s van on the South Bank, but that was about it. However, three short years later, things have changed. Bean About Town’s been joined by Beany Green and, in the summer, the Look Mum No Hands! Pop-up. Meanwhile, on Lower Marsh, first Four Corners popped up across from the Scooter Café and now, a few doors down, there’s Coleman Coffee Roasters.

Run by Jack Coleman, who’s been roasting since 2010, the coffee shop appeared two months ago. Occupying what was, for a long time, a book shop, it’s not a huge spot, but what it lacks in size, it more than makes up for in character. Oh, and it has a wonderfully-secluded garden at the back.

Coleman Coffee Roasters blends elements of old-school style with a third-wave lightness of touch. There are two single-origins through the V60 and a single espresso blend. In an interesting twist, this can be pulled one of two ways, either as an espresso or an “old-fashioned” espresso. Jack also dishes up Oaties (think savoury pancakes) with various fillings.

You can see most of Coleman Coffee Roasters from the street, where two generous windows flank a recessed glass door, laying the seeds for a surprisingly pleasant interior. To start with, all that glass (supplemented by natural light from the back) means it’s very bright inside. The recessed door also creates, in effect, two bay windows. There’s a small, two-person window-bar to the right, ideal for people watching, while to the left, a table’s flanked by a pair of benches, creating a sort of window booth.

There’s more seating beyond this: three square two-person tables to the left and, to the right, a three-person bar, with retail shelves above, packed with bags of Coleman coffee. In all, it seats 15, if every seat is taken. At the back, the counter’s on the left, while to the right, a narrow corridor leads past the espresso machine to a wonderfully sheltered and secluded garden with high walls on three sides and the back of the (three storey) building on the fourth. The garden has two large, communal tables, but its best feature is the trees. To the right is a flowering Jasmin tree, while to the left, a fruiting pomegranate. Finally, growing all the way up the back wall of the building, is a wonderful old mulberry tree.

The garden furniture is all wooden, with seating provided by benches (against the garden’s back wall) and stools. If there’s rain about, a tarpaulin can be pulled out to cover the left-hand table. Inside, seating’s also provided by stools and benches, while the bars, table-tops and counter-top are all made of concrete slabs flecked with marble.

There are two unusual menu items. The first are Oaties, Staffordshire oat pancakes (although the batter contains some wheat flour so isn’t gluten-free), which are fried on a hot plate behind the counter. You get two, with a choice of five fillings (four savoury, one sweet). Naturally, I had to have them, plumping for Appleby’s Cheshire cheese and stewed tomatoes. My Oaties were lovely and light and very tasty, reminding me of galettes (buckwheat pancakes from Brittany).

Jack only roasts two single-origins (Brazil and Guatemala), both available as V60s. These are also blended in a 60/40 ratio for espresso, leading to the second unusual menu item. It’s not uncommon to serve an espresso for milk, with another blend/origin for black drinks. Jack uses the same for both, only he pulls them differently, using different group heads on his Synesso.

The first espresso, designed for milk, is very much in the third-wave style, 20g in, extracted at 92.4C. The second, called an “old-fashioned” espresso and designed to be drunk on its own, is rather different, 11g in, extracted at 88C. Despite the difference in input weights, the result is two very similar-sized espressos. I should know, because I, naturally, had to try them both.

I started with the old-fashioned espresso, a very smooth, drinkable espresso, right up my street. In contrast, the second was like a punch in the mouth: much sharper and fruiter. While not unpleasant, I definitely prefer the old-fashioned. It was, however, hard to believe that they were the same blend.

Intrigued, I tried the espresso (not the old-fashioned) in milk as a piccolo. This was simply wonderful, but once again very different. Given how punchy the espresso was, it was very smooth and beautifully-balanced, the fruity notes combining really well with the milk. Again, I wouldn’t have known it was the same coffee. Although a long way from the sweet flat whites I’m used to, like the old-fashioned espresso, I could drink it all day!

December 2016: Coleman Coffee Roasters has won the 2016 Best Espresso Award and was a runner-up for the 2016 Best Outdoor Seating Award.