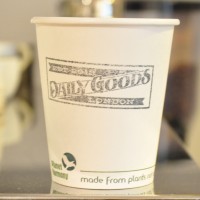 A big motivation for publishing some of my Saturday Supplements on Wednesdays is to get through my backlog of places such as today’s Saturday Short, Daily Goods London. I visited it in January, but, until now, hadn’t found the time/space to squeeze it into the Coffee Spot. This is a shame, since it’s a lovely little place that doesn’t need much squeezing, one which continues my love affair with small Coffee Spots.

Located inside Kinoko Cycles on London’s delightfully-named (and delightful) Golden Square, Daily Goods is another marriage of coffee and cycling that’s quite common these days (eg Oxford’s Zappi’s Bike Café, Shoreditch’s Look Mum No Hands and, just around the corner, Rapha Cycle Club). Unlike the others, which are more akin to coffee shops, Daily Goods is perhaps best described as a coffee counter or concession, occupying a small counter space inside the much large Kinoko Cycles.

Update: Daily Goods has now moved south of the river to Camberwell and its own coffee shop. Full details are on the Daily Goods website.

Daily Goods is one of those places that I’d heard lots about since it opened a year and a day ago (20th May 2013). Fellow blogger Chloe (Faerietale Foodie), for example, raves about its espresso. I’m inclined to say that Daily Goods is a tiny place except that since it’s in a large bike shop, it hardly feels tiny.

As you come in, there’s a counter immediately to your right, built into an alcove in the wall. On the right is the till for Kinoko, while on the left, there’s enough space for owner/barista Carter’s two group La Marzocco, grinder and some cookies and doughnuts (more of which later). And that’s it. There’s a bench outside if the weather’s nice, but otherwise you’ll have to stand at the counter with Carter, chatting about the coffee, another of Chloe’s favourite pastimes. If I’m honest, it’s my preferred option too.

While I was there, Carter had just put on some Ethiopian Yukro from regular roasters, Workshop, replacing his normal blend, Cult of Done. I tried it as a straight espresso which came, despite Daily Goods’ size, in a proper cup. Thinking it was the Cult of Done, I found it surprisingly fruity for my palette before realising my mistake. I also tried it with milk as a takeaway piccolo which I thought worked very well.

My final sample was one of Carter’s doughnuts from Glazed & Confused: there was a staggering choice of eight different glazes/fillings and I had a hard time choosing before settling on the classic with a rhubarb and custard filling which was every bit as good as it sounds!

So, with little else to do than chat with Carter, that’s what I did. He’s a very friendly fellow, originally from Idaho in the north-west USA. Nearby Portland was his coffee mecca, then he moved to New York City, where he worked at both branches of Ninth Street Espresso in the East Village/Alphabet City, before bringing his skills and passion for coffee to London.

Ultimately, Carter wants to recreate the neighbourhood vibe that he found while working in Ninth Street Espresso, particularly the original 9th Street store. Daily Goods is very much a starting point for him in that respect, but for the moment he seems happy behind his counter, dispensing excellent coffee and a warm welcome to all who want it. Catch him while you can!